Leader of the New Dalek Empire

Destroy all life that is not a Dalek

The Supreme Dalek is a variant of the Daleks found in the British sci-fi series Doctor Who and is stated as being the highest-ranking member of Dalek society - surpassing even Davros himself in terms of power.

It resembles a modern Dalek but has noticeable differences. One such is that he had a red coloration, gold hemispheres, collar and neck rings,three plinth-mounted dome lights featuring cages with three, rather than four uprights, and large golden clamps connecting its shoulders to an extended neck bin.

During the Dalek Civil War, a Supreme Dalek led the Renegade Daleks, who fought against Davros' Imperial Daleks.

Another Supreme Dalek acts as the leader of the New Dalek Paradigm in the Eleventh Doctor's Era.

In the episodes The Magician's Apprentice and The Witch's Familiar another Supreme Dalek (similar to the one in Journey's End) served as leader to the Daleks that captured Clara Oswald and Missy. He also ordered their supposed extermination. He along with the other Dakeks are attacked and destroyed by the Daleks that lived in Skaro's sewers before the city's collapse. 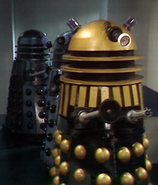 A Supreme Dalek from the Classic Series

White variant, leader of the New Dalek Paradigm as seen in "Victory of the Daleks" 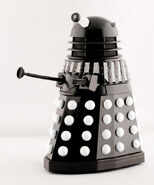 Black variant seen in "Resurrection of the Daleks"

A supreme Dalek in "Dalek Invasion on Earth"
Polski
Community content is available under CC-BY-SA unless otherwise noted.