Ruler of the Kree Empire

Destroy the Skrull race and obtain the Tesseract.

Expand the Kree Empire's rule across the galaxy.
Kill Captain Marvel for her betrayal (all failed).

The Supreme Intelligence is the main antagonist of the 2019 Marvel Cinematic Universe film, Captain Marvel. It is a shapeless artificial intelligence that serves as the ruler of the Kree Empire.

Though Vers was able to track down Talos and several Skrulls taking refuge in Earth after being briefly kidnapped by them, she learns of a horrible truth: Mar-Vell defected to the Skrulls after learning that they just want to find a new homeworld to be safe from the Kree Empire after their original homeworld was destroyed on the orders of the Supreme Intelligence because of their refusal to submit to Kree rule. Vers also learned that she was once a human pilot named Carol Danvers who witnessed Mar-Vell being killed by Yon-Rogg when she tried to destroy the energy source that he and Starforce was after, and that she absorbed the energy after destroying the engine that briefly erased her memories. She is also horrified to find out that the Supreme Intelligence briefly altered Vers' memories to make it look like the Skrulls murdered Mar-Vell in order to gain her trust. Because of this horrible revelation, Vers realized now that she was tricked by the Supreme Intelligence to lead the Skrulls for itself to wipe out from the universe.

During Vers' interrogation, the Supreme Intelligence taunts Vers before reminding her that the energy that she's utilizing could be taken away, which would leave her powerless. However, being unwilling to submit herself further into its control, Vers frees herself from the implant that suppresses her powers and vaporizes the Supreme Intelligence's avatar. Vers then allows the Skrull refugees to escape back to Earth while defeating Starforce and foiling Ronan's fleet attack on Earth. Following the retreat of Ronan and his remaining forces, Vers tasks a defeated Yon-Rogg with delivering a message to the Supreme Intelligence, proclaiming that she would return to put an end to the genocidal war.

The Supreme Intelligence is mostly mysterious, able to take on many forms to many of his subjects. When evaluating Vers, the Supreme Intelligence presented itself as wise, careful and understanding. This was seen in the way that Supreme Intelligence advised Vers to focus less on the mystery of her past and more on her current duty to fight for the good of the Kree Empire. To make someone a member of the Kree Empire, the mysterious ruler was not above tricking and lying to the person. This was demonstrated when she assured Vers that the Skrulls were responsible for having removed her house, her family and her memory. However, his true facade eventually shows up as it proved to be insensitive, arrogant and completely despising the humanity of Danvers, judging that it was her greatest weakness. 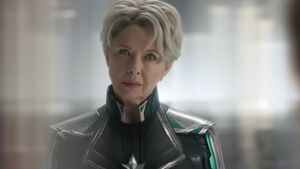 Retrieved from "https://villains.fandom.com/wiki/Supreme_Intelligence_(Marvel_Cinematic_Universe)?oldid=3817391"
Community content is available under CC-BY-SA unless otherwise noted.