To bring forth destruction upon Asgard in times of Ragnarok.

Surtur is a being of pure evil and the enemy of the Asgardian pantheon in Marvel comics, a monstrous demon of apocalyptic proportions he is one of Thor's most powerful main opponents in his native realm.

Surtur was native to the extra-dimensional plane of Muspelheim and was the mortal enemy of the Asgardian ruler Odin and his son Thor. Surtur and the demonic Frost Giant Ymir were older, and therefore more powerful, immortals than Odin and Thor, who were always hard pressed to defeat them. The two demons were once summoned to Earth together when the Spell of Fire and Ice was cast by the Sons of Satannish.

Surtur's role in the Ragnarok Cycle began by forging/reforging Twilight — a huge magical blade — and then sending his legions of fire demons to Earth, to draw Asgard's armies away from their capital city. Surtur then crossed Bifrost, the Rainbow Bridge, and attempted to destroy the city once and for all. However, Odin, Thor, and his adopted brother Loki made a last stand and eventually defeated Surtur - at the cost of Odin, who fell with his foe into a dimensional rift. After the final Ragnarok, Beta Ray Bill briefly visited the ruins of Asgard, and saw Surtur's massive form falling from the sky. Surtur was still clutching Twilight, although the sword was broken during Bill's battle with the demon Asteroth.

In Thor: Ragnarok, Surtur is a supporting antagonist who is the reason of the Ragnarok.

Surtur was depicted as an immense and malevolent being whose power was of apocalyptic proportions. Surtur possessed strength and durability surpassing that of Thor; the ability to generate intense heat, flames or concussive force; molecular manipulation; levitation and inter-dimensional travel. Surtur is an enormous fire demon, standing over 1,000 ft. in height. He possesses superhuman strength, stamina, and durability far surpassing that of Thor. He is possibly a being composed of "living" flame and can manipulate cosmic energy to generate intense heat, flames or concussive force, holding might deemed near-omnipotent. He can also manipulate cosmic energy for various effects, including levitation, molecular manipulation of himself, inter-dimensional teleportation, and immortality. He is vulnerable to intense cold, and can be imprisoned by certain magical spells or by other beings wielding cosmic energy powers equaling his own; Surtur's powers are usually shown to at least rival those of the All-Father's. Surtur is a master warrior and swordsman, and has a prehensile tail. He possesses an immeasurable intellect, and has vast knowledge of ancient and arcane wisdom.

Surtur possesses the giant sword Twilight, also known as the Sword of Doom, composed of an unknown metal. The sword is magic, capable of manipulating vast amounts of mystical energy, such as shattering dimensional barriers and inhibiting Odin's powers. Loki has temporarily tapped into the power of the sword to change Thor into a frog (Thor is normally resistant to this type of magical transformation) and making the Asgardian populace sick (Asgardians are normally immune to disease). Morgan le Fay tapped into the power of the sword to reshape the entire planet Earth from modern day into a medieval world after using the chaos magic of the Scarlet Witch to "bridge the gap" between her personal faerie powers and the Asgardian magics bound to the blade. When the sword is bonded with the Eternal Flame, its powers are further increased to an unknown level.

The Eternal Flame has an unknown connection to Surtur. When in its vicinity, Surtur claimed it increased his powers. It is unknown to what extent this power increase leads to. 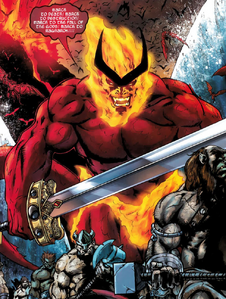 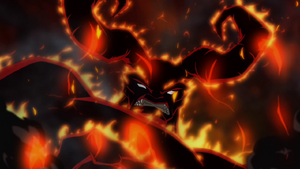 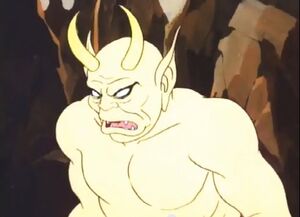 Surtur in Spider-Man and His Amazing Friends. 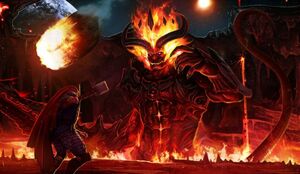 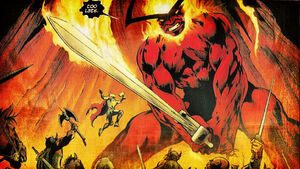 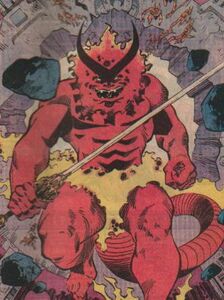 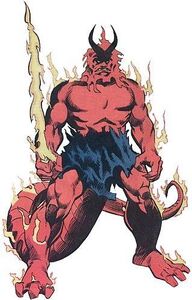 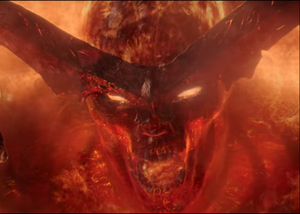 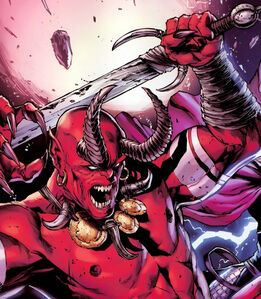 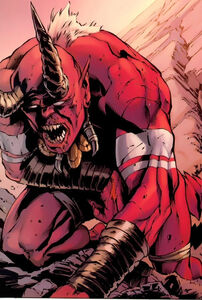 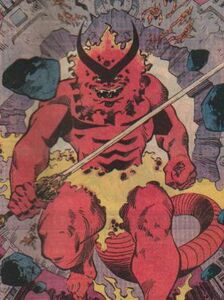 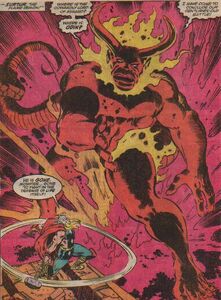 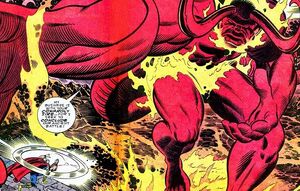 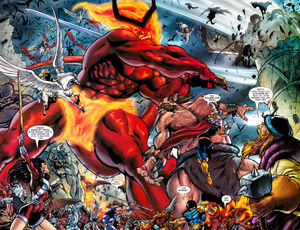 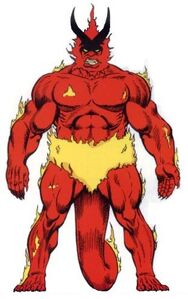 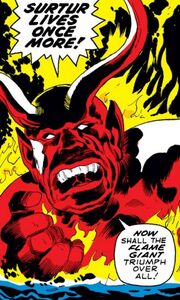 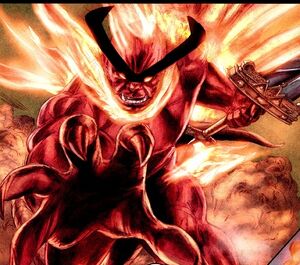 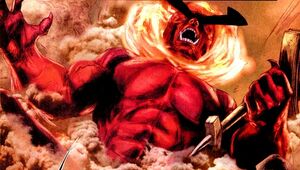 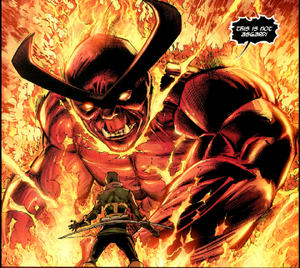 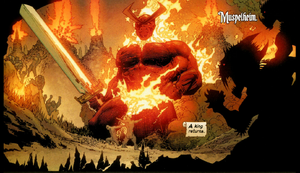 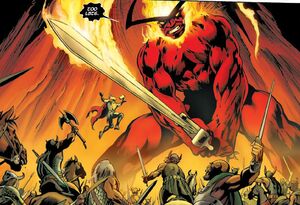 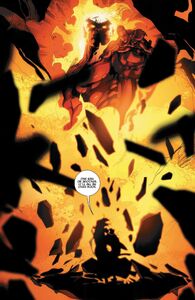 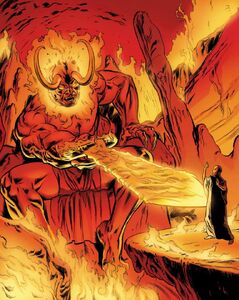 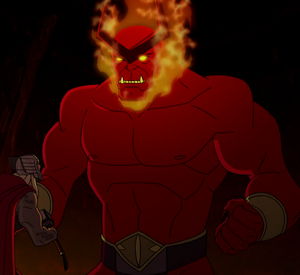 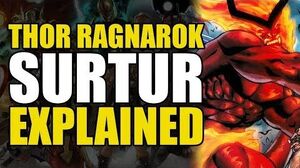 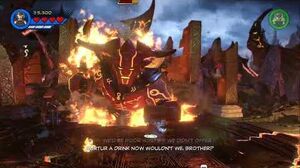 Retrieved from "https://villains.fandom.com/wiki/Surtur_(Marvel)?oldid=3530509"
Community content is available under CC-BY-SA unless otherwise noted.