Susan is the main antagonist from Regular Show episode "Benson Be Gone".

She was voiced by April Stewart.

She was hired by Mr. Maellard to replace Benson as the park's manager due to things that Mordecai and Rigby did but Benson was blamed for, these being prank calls worth up to $500, snacks disappearing from the snack bar, and holes in the walls. Also, Susan was to help get the park back on track and fix the many errors that Benson made, even launching an indirect insult about how Benson managed the park.

At first, Susan appeared to be nice and organized, but later, she started showing her true personality. She would first fire Benson, after directly refusing to obey Susan's overworking demands and giving the consent to fire him, after becoming a slacker like Mordecai and Rigby. She then forced everyone else to work incredibly hard, and in the process, they begin transforming into clones of herself, albeit with their own faces. However, Benson returned to his old self and helped free Mordecai, Rigby, and everyone else from Susan's influence by convincing them to slack off.

This enraged Susan so much, she went into the ground and returned as a giant. She tried to kill everyone with a building in her hands, picked up Mr. Maellard and was about to crush him until Leon drove Mr. Maellard's limo at Susan and smashed off both of the heels in her shoes. Without the heels on her heels, Susan lost balance and fell into the fiery pit, presumed killing her.

Susan (in her giant form) was one of many villains to return in the episode "Exit 9B", where she did battle with the baby ducks' fused form. She was sent back to Hell. 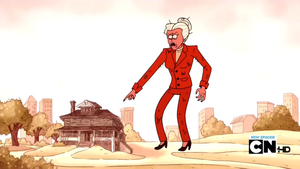 Susan as a giant.
Add a photo to this gallery

Retrieved from "https://villains.fandom.com/wiki/Susan_(Regular_Show)?oldid=3709190"
Community content is available under CC-BY-SA unless otherwise noted.