Susan Gates is the main antagonist of the 2017 Lifetime film A Deadly Affair.

She was portrayed by Valerie Azlynn.

Susan Gates is a married lawyer who was having an affair with her friend Mary's husband, Charlie, only for her illicit lover to decide to end their relationship. Susan was not convinced at first, but when she and Trevor dined with Mary and Charlie in the film, seeing them together like a happy couple convinced her that it was over. In a fuming rage, Susan killed Charlie, fatally stabbing him with a knife in his back. She covered up her murderous secret and posed as a supportive friend for Mary, as she was facing accusations of killing her husband; while also fending off the advances of Susan's husband, Trevor, who claimed that he and Mary had their own affair and that he was in love with her. Susan confronted Mary during a school board meeting, stating that Trevor told her everything.

Susan was revealed as Charlie's killer when she walked in on Trevor pleading to Mary at an abandoned house. She helped Mary fight off Trevor, who searched around in his wife's purse. Susan pulled out a gun, which is what Trevor was searching for, and shot her husband. After Mary heard the shot, Susan claimed that Trevor was going after her and the shot was in self-defense. She shot Trevor again when she saw that he was still alive, but before dying, Trevor handed Mary his wife's ring and revealed that Susan killed Charlie.

Susan brashly admitted to Mary that she had an affair with Charlie and killed him when he broke it off. Charlie's sister, Krystal, spotted them that night, so Susan planned to have Mary call Krystal over so she could kill her as well. After Mary escaped, the villainess chased her to her car and brought her back to the house so she could kill her and Krystal to make it look like a murder-suicide committed by Krystal. Mary later charged at Susan, knocking the gun out of her possession and holding her at knifepoint until Krystal arrived with Detective Malone, who later arrested Susan. 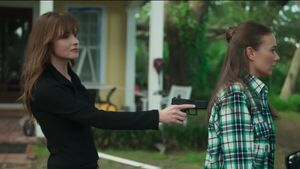 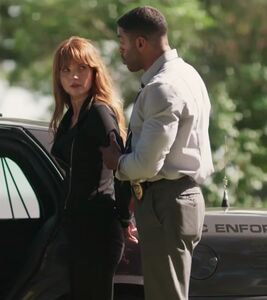 Add a photo to this gallery
Retrieved from "https://villains.fandom.com/wiki/Susan_Gates?oldid=3370483"
Community content is available under CC-BY-SA unless otherwise noted.