Susan Hastings was a plot-twist villainess from the 2004 film Vampires:  Out for Blood.

She was portrayed by Vanessa Angel.

Susan Hastings was a noted author of vampire novels, as well as the ex-wife of main protagonist Hank Helton, who had been stalking her. When Hank is bitten by a powerful vampire, Susan reluctantly helps him seek out the vampire nest. Despite being handcuffed by Hank to keep her safe, the master vampire gets to Susan and bites her, as both of them reveal to Hank. Susan states that killing the master would kill whoever is connected to him, with only the killer staying alive, so with that, both Hank and Susan kill the master. During their escape, however, Susan stays behind, and Hank ends up put under psychiatric hold; under arrest for killing Susan.

Susan appears in Hank's cell, now fully turned into an evil vampiress. She boldly reveals that she wanted to become a vampire and she used Hank and his devotion to her to get what she wanted. After her villainous revelation, the evil Susan pounced on Hank and morphed into her demonic vampire form, but she was killed by Hank with a wooden stake. 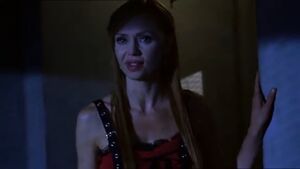 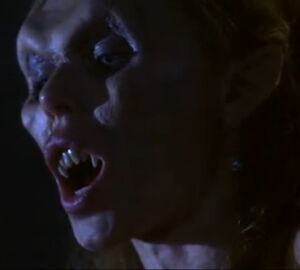 Add a photo to this gallery
Retrieved from "https://villains.fandom.com/wiki/Susan_Hastings?oldid=2482614"
Community content is available under CC-BY-SA unless otherwise noted.