Stop the King (both succeeded).

Susie is the deuteragonist as well as one of the two secondary antagonists (alongside Lancer) of the first chapter of the indie video game Deltarune as well as a mentioned character in Undertale. She is the first enlisted party member, and is the monster that was mentioned in the Prophecy.

Susie's past is unknown, though something in her childhood led her down the path of a bully that had not made any friends, or it is possible that she had a mean personality from birth.

When Susie is first introduced in Chapter 1, she enters the classroom Alphys is teaching in, late. Her presence makes everyone in the room nervous. She and Kris are sent out to retrieve chalk from the supply closet, as all of the chalk in Alphys' class has disappeared under mysterious circumstances.

When Kris exits the classroom, they catch Susie eating the chalk. Susie is alarmed by their presence, and she proceeds to talk about how Kris ratting her out about eating the chalk will finally get her expelled, then adds that everyone in the school is waiting for her expulsion. She slams Kris against a locker, then attempts to eat their face. She stops after remembering that Toriel is Kris's mother, and that'd "it'd be a shame to make her bury her child". She then tells Kris that they'll do the entire project, then asks their opinion. Before they can give their feedback, she tells them to not bother answering, as their choice doesn't matter.

Susie and Kris go to the supply closet, and after opening it, it gets dark. Susie insists Kris goes first, then says she'll go first, then finally agrees they'll go in together. They enter the closet, and Susie tells Kris to look for a light switch. After noticing the closet does not have any walls, Susie comments that it's "broken", and says that if Alphys wants chalk, she'll have to get it herself. Before she and Kris can exit, the door closes itself, and the floor caves in, causing Kris and Susie to fall.

After Kris and Susie reunite in the Dark World, they are attacked by Lancer, causing Susie to panic and run away. Kris meets her again in the Dark Town overlooked by Ralsei. They enter the castle, and meet Ralsei.

The Prophecy is explained to them at some point, and either before or after it, Lancer bursts in and attacks the party. Susie keeps attacking, even if Kris attempts to get her to ACT. After the fight, Susie splits away from the group again.

On the way to the Eastern door, Topchef talks about a beast that came along and ate the cake he had been strenuously working on. Ralsei and Kris connect that the "beast" was actually Susie, and they go to find her.

They find her again, trying to open the Eastern door. Ralsei asks how she got through the two-person spike puzzle, and she tells him that she walked through it. She is irritated at how hard the door is to open. After a bit of persuading, she joins the party once again, but "follows at a distance such that no one can tell she's associated".

Eventually, after fighting K. Round, Ralsei scolds Susie for provoking K. Round and starting a fight, which causes Susie to change from being a bad hero into being "one of the bad guys", joining Lancer and betraying the other two heroes and, as the two investigate the area, cause Kris and Raisei to optionally buy a cookie from them (which doesn't even heal much HP), try to cause the heroic duo to get lost in a maze (where even the evil duo don't know the way through), and further trick the duo into building blueprints for the "Thrash Machine", a device designed to destroy the heroic duo. After realizing the Trash Machine design was bad (caused by a lack of good materials), they blow up the machine and fight the heroes regularly.

After said fight, Ralsei convinces Susie and Lancer to join the heroes once more for the prophecy, but said union doesn't last long, as Lancer betrays the group by letting the castle guards imprison them. After escaping the jail cell, she encounters Lancer, who explains that he was the one who ordered the imprisonment, causing Susie to attempt killing Lancer, but she can't bring himself to do the deed, also swearing that she won't kill the King. After this, Susie releases Ralsei and Kris, and joins the party for the rest of the chapter; she also can now ACT instead of just attacking.

After reaching the top of the castle with the rest of the party and fighting the King, she was tricked with the rest of the party to put away their weapons and heal the King. She then saves Kris from the clutches of the King's wrath (alongside some help from either Ralsei or Lancer), and after saying goodbye to Ralsei and the other Darkners, she goes back with Kris, suggesting that both go back the next day.

Susie has the appearance of a tall, purple, vaguely reptilian monster with freckles at the sides of her face. In Hometown, Susie has messy aubergine hair that hangs over her eyes, a long purple jacket, a white and blue shirt, a pair of torn jeans and a pair of black shoes.

In the Dark World, her hair is plum, her skin turns pink, and her clothes are replaced with: a black vest with pink trim, a purple shirt, baggy plum pants, and black boots with golden trim. She also has studded bracelets on her arms and a belt with a large golden buckle in the shape of a heart.

After defeating King, she pulls her hair out of her eyes, which are revealed to be yellow.

Susie is a monster who is feared by her classmates due to her mysterious nature. According to Monster Kid, although she has not bullied or even talked regularly to anyone, her intimidating appearance and her abnormal strength (shown by her kicking a ball so hard that it accidentally broke Undyne's car window) people believe she's a dangerous person. She is also very close to being expelled. However, Noelle seems to have a crush on her and hopes she is secretly nice. At first, her actions at the start of the game seem to have proved the rumors against her true due to her violent nature towards Kris. ex. Pushing them against the locker when she found out that Kris saw her eat Alphys' chalk.)

At the beginning of Chapter 1, Susie prefers to solve conflicts with violence, and will always attack the enemy on top. She will also frequently make fun of Ralsei, and eventually joins Lancer and turns against Kris and Ralsei. Susie and Lancer then develop a close friendship through the fact that that they are outcasts of their own worlds. During their antics, they show their care for each other through sharing of food, complimenting each others' efforts and assisting when they are in need. Later on, however, once Kris and Ralsei befriend Lancer, she decides to rejoin them. She does not seem that much nicer at this point, although she assures Lancer that this does not mean they are no longer friends after he shows doubts. As they walk towards the castle they find a Dark Candy tree, and Susie remarks about her hunger and realises the fruit is too high to reach. Lancer then helps her by making himself positioned like a stool for her to stand on to make her reach the fruit. When Susie is about to eat the fruit, Lancer then mentions that his father (the King) has never let him eat from the tree. Hearing this, Susie then gives Lancer the fruit instead. This a prime display of how much Susie cares for Lancer. When Susie starts to talk about destroying anyone in the way protecting the Dark Fountain, Lancer starts fearing that Susie and the King will kill each other. Lancer then flees the party and orders the Royal Guards to put the the heroes in the Dungeon to prevent the fight from occurring. During the effort to rescue Kris and Ralsei, Susie finds Lancer and asks him to free Kris and Ralsei, not yet realizing his betrayal. Lancer then reveals that he had locked up the heroes and before he can explain his reasoning, Susie cuts him off and accepts his betrayal, exclaiming that "Why would anyone want to be [her] friend anyway." However, after getting into a fight with a reluctant Lancer, she misses on purpose. After facing the possibility of upsetting Lancer by hurting King, however, she promises to resolve the encounter with King peacefully. She joins the party for real, promising to cooperate and is willing to ACT if Kris tells her what to do. She also threatens King when he threatens to throw Lancer off the castle, allowing Lancer to break free of his grip. She also strikes King with her axe when he threatens Kris after the latter uses their shield to block one of King's attacks intended for her.

Once she and Kris are about to head back to the Light World, she pleads with them to at least say goodbye to Ralsei and all the Darkners first, indicating she will miss their company. As soon as Susie and Kris leave the Dark World, she suggests that they both go back the next day. 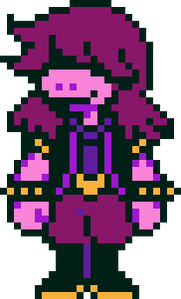 Susie in the Dark World. 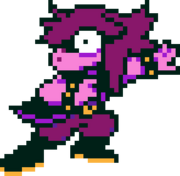 Susie's sprite when she's surprised by something. 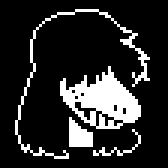 Susie's default talk sprite.
Add a photo to this gallery

Deltarune Chapter 1 Lancer & Susie Fight
The boss fight against Susie alongside Lancer.
Add a photo to this gallery

Retrieved from "https://villains.fandom.com/wiki/Susie_(Deltarune)?oldid=4339189"
Community content is available under CC-BY-SA unless otherwise noted.