Be admitted in the Markos Dance Academy.

Kill Helena Markos.
Lead the cult of the Three Mothers (all succeeded).

Susanna "Susie" Bannion is the main villainous protagonist of the 2018 supernatural psychological horror remake film Suspiria. She is the daughter of an extremely conservative mother and an aspiring dancer studying in the Markos Dance Academy in Berlin during the German Autumn. She is secretely Mater Suspiriorum, one of The Three Mothers (Mater Tenebrarum, Mater Lachrymarum and Mater Suspiriorum)

She was portrayed by Dakota Johnson in her first villanous role.

In 1977, Patricia a student from the Markos Dance Academy left the school claiming the matrons of the institution were witches, she tells everything to her psychiatrist, Dr. Josef Klemperer before going missing, short time after, Susie Bannion an american applicant for the dance academy arrives hoping to learn dancing from her idol Madame Veva Blanc, she auditions for Miss Tanner (Blanc's assistant) and other two teachers, meanwhile Blanc is teaching a class when she feels Susie's movements and goes see her audition. Susie is admitted in the Academy right away.

On her first rehearsal, Blanc introduces Susie to the rest of the students before rehearsing Blanc's masterpiece "Volk", Olga, the student replacing Patricia as the protagonist has a breakdown as she misses Patricia, Blanc tries to calm her down but Olga accuses the matrons of being responsible for Patricia's dissappearence as well of being witches, Blanc then gives the main role to Susie. Just as Olga is leaving she is bewitched by Miss Griffith, a sheepish matron to the audition room, there it is revealed that Susie's movements inflict violently on Olga's body crushing and twisting her body breaking her bones like a rag doll until she's left half dead, the matrons then carry her with hooks through a secret door that leads to their inner sanctum.

One day the witches vote for who shall lead the coven, Helena Markos (the Academy's founder who claims to be one of the Three Mothers) or Madame Blanc, the witches vote and Markos wins once again, after this Blanc discuses with Tanner their plan to use Susie's body as host for Markos, as she is old and sick. During Susie's stay on the Academy, Blanc makes her have dreams involving her, "Mother Markos" and the coven.

During a rehearsal of Blanc's new choreography "Open Again", Susie performs for Blanc unknowingly that Markos is on the floor below feeling Susie's movements, Blanc feels her as well as Susie, but she didn't know what it was, Susie then tells about this to Sara, but she calms her down. Blanc talks to Tanner who tells her Markos just wanted to feel her.

Dr. Klemperer asks the police to check the Academy for sorscery, to detectives visit the school but are bewitched by the matrons and their memories are erased, when Klemperer sees the police will take to action against the Academy, he decides to talk to Sara Simms, another student of the Academy and Patricia and Susie's friend, Klemperer explains the situation to her but she is skeptical so he shows her Patricia's journals, where she wrote everything about The Three Mothers cult, she's convinces and investigates the Academy for herself, she finds the secret entrance to the inner sanctum, meanwhile Miss Griffith commits suicide and the matrons take her to Mother Markos, Sara hears them and steals one of their hooks as proof. The witches realize this and trace the call to the police to Klemperer.

Also, Blanc plans reunions for the matrons at a local restaurant so Susie "accidentally" sees them having fun and she doesn't suspects.

Klemperer assists to the presentation of Volk in the Academy, meanwhile Sara investigates further inside the building, she finally finds Patricia, rotting alive also another legless girl that crawls towards her and before she escapes in terror she ecounters Helena Markos on her bed calling her name. As Volk is being performed, Blanc manifests holes on Sara's path breaking her leg, the other matrons find her and heal and hypnotize her, then they take her to the performance so she can do her part, she dances with robotic presition when Klemperer notices Sara's eyes and Susie's eyes have switched colors, when Volk is nearly finished, Sara collapses to the ground with her leg broken again. That night, Blanc speaks telepatically to Susie blaming her for the incident, here is were Blanc begins to feel something off with Susie.

Blanc invites Susie to one of their reunions at the restaurant but while the others are having fun Blanc and Susie stare at each other. Klemperer disposes of Patricia's journals and when he returns home he finds Anke, her wife who went missing during the war, happy to see her again they walk all night, engulfed by his love for her he doesn't realize they were walking towards the Academy, Klemperer then realizes Anke was just a vision created by the witches who then ambush him.

That same night Susie is led to the inner sanctum where she finds the other students bewitched and performing a dance as Sara is beind disemboweled as part of a sabbath next to Patricia. She also finds Dr. Klemperer witnessing everything in terror naked on the ground, Miss Tanner with Helena Markos and Madame Blanc, Susie tells exposes Blanc saying she looks scared, Markos mocks Blanc saying she's scared of Susie, while Markos wants to go on with the ritual, Blanc tries to avoid it as she is having a bad omen, Markos argues with Blanc and Blanc tries to stop the sabbath just to be nearly decapitated by Markos.

Markos tries to finish the ritual but the matrons witness as an incarnation of Death appears and walks towards Markos, Susie then asks Markos which of the Three Mothers she claims to be which she answers in panic "Mater Suspiriorum" but Susie answers back she is Mater Suspiriorum, revealing herself, then Death kills Markos and makes all the heads of the witches who supported Markos explode while Tanner cries over Markos dead body, then Susie "releases" the girls being part of the ritual by killing them, once Susie takes over the coven, they release Dr. Klemperer.

The next day it is revealed that Blanc is barely alive and Susie visits Dr. Klemperer on his house and apologizes for what her "daughters" did to him and tells him the truth about his wife and what happened to her during the war to comfort him, then she erases his memory of all the horrible things he witnessed. 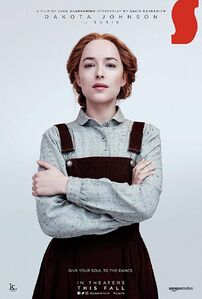 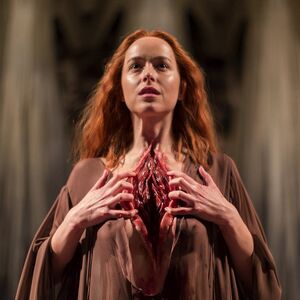 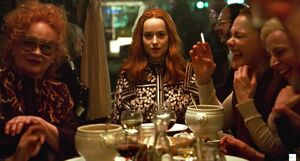 Susie at the table. 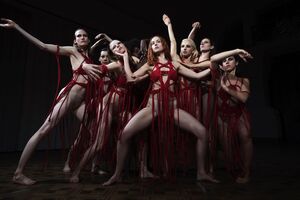 Susie amidst a performance.