Susshi is one of the many monsters that King Dedede buys to defeat Kirby and a character in the Kirby: Rick Back at Ya! episode "A Princess in Dis-Dress".

When Dedede challenges Commander Vee (who at the time was really Princess Rona) to a duel, he buys Susshi fearing that he would have no chance against Vee. As it turns out, he was right. As soon as Vee pulls her blade on him, he runs back, giving Vee an early victory. As the crowd is busy laughing at him, Dedede introduces the "main event". The crowd goes silent as Susshi crashes into the arena and starts attacking Vee. Susshi is certainly the least optimal monster, as he really has no way of attacking besides body slamming.

Kirby intervenes as Susshi pounds away at Vee. Kirby begins to inhale but Susshi just jumps out of the way. Dedede laughs at Kirby's feeble attempt to fight back, but Escargoon points out that Kirby was really trying to get the sword laying in the middle of the arena. Kirby inhales the sword and gets the Sword ability. Kirby tries to chop Susshi to pieces, but the sword just bounces off his thick body. Vee and Kirby discover Susshi's weak spot - his long tail. The two slice Susshi's tail into chunks and the rest of Susshi crashes back down on the arena floor. Susshi is occasionally destroyed per se, but he is significantly weakened having lost his tail.

Susshi is a burgundy fish-like creature with a monstrous appearance. His body is round and tough. He has a lavender belly and white scales running across his eel-like tail and on his body. He has a brown fin running across his back and lime green fins. While Susshi's body is tough and muscular, his tail is actually rather soft and rubbery, as seen when Kirby and Vee cut it up. 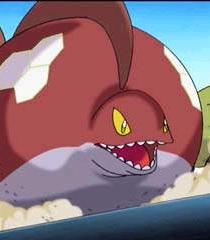 Close up view of Susshi. 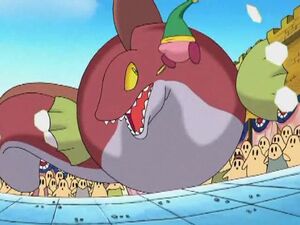 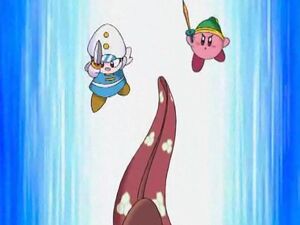 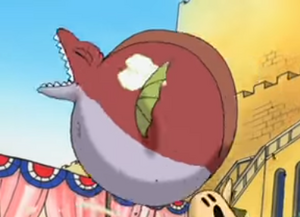 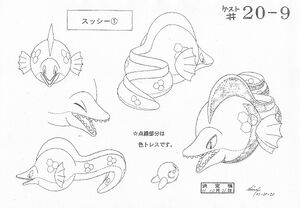 Susshi concept art.
Add a photo to this gallery

Retrieved from "https://villains.fandom.com/wiki/Susshi?oldid=3910062"
Community content is available under CC-BY-SA unless otherwise noted.