Vast power over time and space on a godlike scale

Destroy all life in the universe.

Sutekh (also known as Sutekh the Destroyer) is a member of an alien race called the Osirans, and was encountered by the Fourth Doctor in the Doctor Who story "Pyramids of Mars". He is a crazed and blasphemous super-being who feared all forms of life might one day challenge his rule.

He was portrayed by Gabriel Woolf, who later provided the voice of the Beast in the revival series.

The Osirans were an ancient and incredibly powerful but now extinct race, their end was caused by Sutekh, who destroyed their homeworld Phaester Osiris and left a trail of destruction across the Galaxy. However, Sutekh's brother Horus and the remaining 740 Osirans tracked Sutekh down to Ancient Egypt and used their powers to restrain and imprison him in a Pyramid with the the Eye of Horus beaming a signal from Mars to suppress Sutekh. The tales of the Osirans were remembered in Egyptian mythology with Sutekh as the basis of god Set.

In the year 1911, when a archaeologist named Professor Marcus Scarman broke into the inner chamber of the Pyramid of Horus on Earth, Sutekh killed Scarman and brought his corpse back to life to serve him by having the Osiran service robots build a rocket aimed at the Eye of Horus on Mars. Though the Fourth incarnation of the Doctor was successful in destroying the rocket, deliberately appearing before him to break his mental holding of an explosion caused by Sarah Jane, Sutekh places the Doctor under his control to take Scarman and the remaining service robot to Mars, where they succeeded in destroying the Eye and freeing Sutekh. The Doctor was eventually able to defeat the freed Sutekh by trapping him in a time tunnel so the Osiran would cease to be from aging beyond his race's lifespan.

The Triumph of Sutekh

In Big Finish's audio boxset, it was revealed that only the body of Sutekh was defeated by the Doctor. Years later, his consciousness found a way into a new body created for him using an Osirian flesh loom. He escaped from Mars and travelled back in time to the reign of Hatshepsut, in order to coerce Tutmosis to usurp his mother's throne and start his reign of terror on the world. He thought he had destroyed the world by the time of the 21st century which surprised Russell Courtland who had predicted it. He went across the Earth devouring in his wake but left his worshippers till last. In fact, the Seventh Doctor tricked him and showed him the solar flare ravaged earth in the 29th century. He went back in time to start over again but this created an ouroboros loop.

The Age of Sutekh

In Big Finish's Fourth Doctor Adventures series, in the two parter Kill the Doctor!/The Age of Sutekh, Sutekh encountered the Fourth Doctor and Leela on the planet Drummond, and used the Rene.net to control the populace to "Kill the Doctor!" and to transform Drummond into the new home of the Osirans. 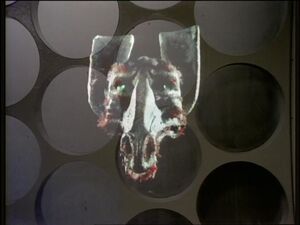 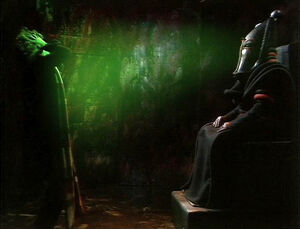 Sutekh torturing the Doctor with his powers. 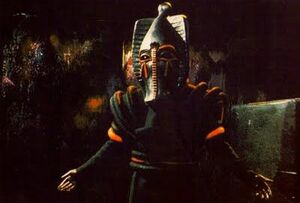 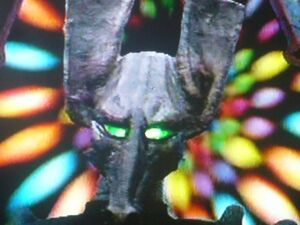 Sutekh, unmasked and trapped in the time tunnel.