The Highest/Epitome of Native Gods

Co-Goddess of the Moriya Shrine

Getting people to worship at the Moriya Shrine.

Attract more faith and people to worship at the Moriya Shrine.

Aiding in the creation of the Hisoutensoku

Suwako Moriya is the former goddess of the Moriya Shrine and a character from Touhou Project, serving as the extra boss of Mountain of Faith as well as a background antagonist in several other games. She was originally the sole god of the shrine until it became officially Kanako's because she was beaten by her and had to relinquish control of the Shrine, willingly at that.

In Subterranean Animism, Suwako appeared in Reimu and Yukari's Scenario revealing an industrial revolution project by Kanako that caused Reimu to get mad for being sent to the Hell of Blazing Fires.

It is revealed that during ancient times, Suwako was a ruler of a small kingdom and controlled the Mishaguji, who were curse gods that had obtained enormous amounts of faith, cursing birth, harvests, militaries, and many other things. Only Suwako was able to tame them. However, gods from the Yamato (Ancient Japan) invaded her kingdom, saying that they were going to unify all the kingdoms to create a single country known as Japan. Unwilling to let this happen, Suwako resisted and fought with the finest steel weapons of the time. However, Kanako held out a thin vine, and Suwako's large steel arsenal instantly rusted away. Suwako realized the difference in their divine powers and her defeat; she graciously forfeited and relinquished her kingdom.

It is said that Sanae is her distant descendant, although Sanae didn't even know it until the events of Subterranean Animism.

In Touhou Hisoutensoku, Suwako was aware of the true nature of the vanishing giant seen roaming around Gensokyo, and was confronted by Sanae over this and other secretive actions Suwako was involved in.

Suwako wears a short simple purplish-blue dress with a frog print design, large white sleeves stitched onto the torso, and a white collar. She has medium length blond hair, grey eyes, and wears a light brown wide-brimmed hat with two frog eyes on the top. She has white kneehighs and black shoes.

In contrast to Kanako, Suwako is more laid back and mischievous. She enjoys competing against others and loses gracefully. Though she feigns ignorance, Suwako is just as capable of scheming as Kanako. Combined with her rarely leaving the shrine, her intentions can be hard to read. 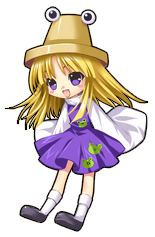 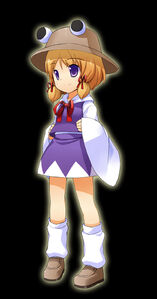 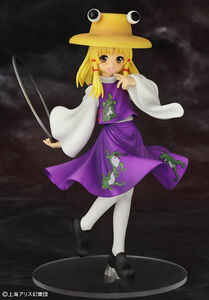 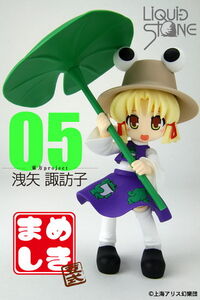 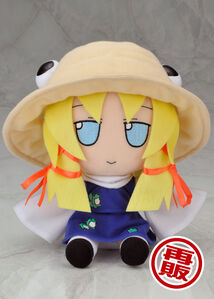 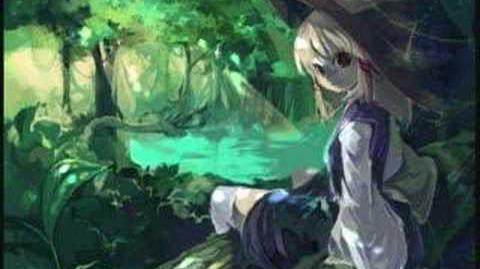