Queen of the Camp Sunny Smiles

Being pretty and popular.

Bullying her little brother McGee and his friends.
Hanging out with Buttsquat.
Winning pageant competitions.

Prove herself to be better than everyone else.

Aid Buttsquat in his schemes to take Lakebottom by force (failed).

Suzi is the central antagonist of the 2013 Disney television series Camp Lakebottom.

She is a 13-year-old short girl who has always been the queen. She is very popular and well-liked among her peers, and has great number of people who follow her, despite her cruel nature. She is also the older sister of McGee and the arch-rival of Gretchen, who has always been beaten by Suzi in every pageant they have participated in together, causing a big rivalry between them. She has a crush on Buttsquat and often accompanies him in his schemes to take Lakebottom by force.

Suzi is the true antagonist in the series, as there are several occasions where she has poses an enormous threat and danger to everyone's safety, due to her always inevitably winning in the end.

She was voiced by Bryn McAuley.

Suzi is a 13 year old short girl. She has long blonde hair with a headband. She wears a pink t-shirt with a dark pink belt and a magenta skirt. She also wears knee high white socks with dark pink shoes. Sometimes, Suzi is seen wearing one of her precious tiaras.

Throughout Suzi's entire life, she has always been the queen. Suzi has been consistently worshipped and praised for her "stunning" personality. Because of Suzi's unparalleled beauty, intelligence, popularity, and overall personality, she has inspired jealousy and low self-worth in countless girls her age, most notably Gretchen. Suzi often feels the need to rub her superiority in the faces of those could never match up to her.

Suzie has often been described as a winner. She always ends up victorious no matter who stands in her way. Suzi can stand up against any impossible situation, making it seem like child's play. She always inevitably gets her way in the end. She also abuse her brother McGee, refer to him as "Baby Bruv", but although the two siblings sometimes bicker, they are usually shown to care for each other. 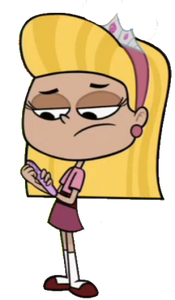 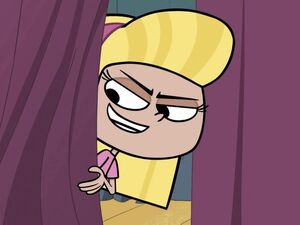 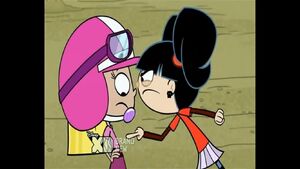 Suzi against her rival, Gretchen. 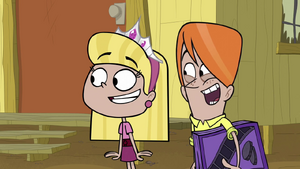 Suzi with Buttsquat.
Add a photo to this gallery

Retrieved from "https://villains.fandom.com/wiki/Suzi_(Camp_Lakebottom)?oldid=3763428"
Community content is available under CC-BY-SA unless otherwise noted.