Suzy Johnson is the secondary antagonist from the show Phineas and Ferb. She is the archenemy of Candace Flynn.

She was voiced by Kari Walghren.

For some reason, Suzy does not want any girl other than her to be around her brother Jeremy. It is unknown why she wants Jeremy to only care for her, despite being already related. Her biggest role in an episode was "Suddenly Suzy". Also in one episode- "Comet Kermillian", when Candace finally gets to have a normal day with Jeremy and not spending the entire day trying to tattletale on Phineas and Ferb, Suzy torments her, including putting squirrels in her pants. However, Candace still has a happy day with Jeremy and Suzy could not launch her final attack on Candace because cooked steaks have landed on her in a large pile.

In "One Good Scare Ought to Do It!", it has been shown that Suzy also torments the local bully Buford, possibly because he tried bullying her or Jeremy. In turn, Buford is extremely terrified of Suzy, admitting to Phineas that she is so scary that she "gives him the willies".

In one episode "Suddenly Suzy", Suzy actually sincerely aids Candace, since, as she explained it, Jeremy was not a factor in the situation. However, as soon as he showed up at the end, she again promptly turned on Candace. 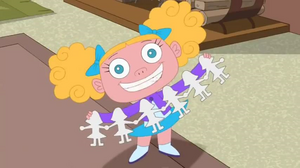 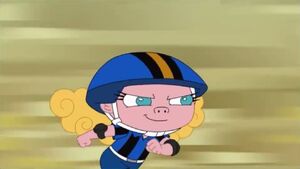