Get a Green Card.

Svetlana is a one-time villain from the FOX animated sitcom The Cleveland Show, only appearing in the episode "Dancing With The Stools". She is a Russian dance instructor and part-time prostitute, who taught Cleveland how to dance, in exchange for a green card. While giving Cleveland his lesson, she sexually harassed him.

She was voiced by Alex Meneses.

In "Dancing with the Stools", Junior replaced Cleveland as Donna's dance partner for a dance contest, since he was a better dancer. Cleveland traveled to Little Moscow in search of a dance instructor to help him become Donna's partner again. Svetlana volunteered to be his instructor, in exchange for Cleveland giving her a green card, so that she could legally live in America. Cleveland promised to do this, but was apparently lying.

Svetlana gave Cleveland a private dance lesson in Cleveland's garage at night with the door closed. She lit the room with candles and played some romantic music on the radio. As she came in contact with him, she made it very clear that she was making a move on him and wanted something a little more than a green card. Cleveland tried to ignore what she was doing, by thinking about disgusting and unattractive things like bearded ladies and Rosie O'Donnel. This did not work so properly.

Svetlana told Cleveland the only way he would be able to beat Donna in their friendly competition is if he committed adultery with her and then asked him to have sex with her. Despite telling him before, that she wouldn't allow any "kissing on the mouth", that's exactly what she tried to do. Cleveland rejected this and ran away, saying he was a married man. This was the end of their relationship.

After Cleveland left Svetlana, Donna burst into the bar, where Cleveland was drinking away his sadness. Assuming she was angry at him about his immoral activities with Svetlana, (which she wasn't, it was actually about Junior kissing her), Cleveland pleaded that nothing happened between them. However, he strongly implied that he did wish to have sex with her and blamed himself for being married.

A Russian stripper, with the same physical appearance as Svetlana, but with a different voice appeared in "A Vas Deferens Between Men & Women". She wore slightly different clothes, now with a black bikini and no iconic hat. Donna hired her and many other Russian strippers to come to the house and convince Cleveland to have a baby with her. Cleveland still refused and Donna pushed all of the strippers back onto the bus, but not until Svetlana begged her not to since they have "so many herpes" and couldn't stand to be in the same vehicle together again.

Svetlana is a tall, well-sculpted Russian woman. She has long, blonde hair, thick blonde eyebrows, heavy blue eyeliner, and pink lips. Her winter attire consists of a white Ushanka hat, a tan parka with white fur, held up with a brown belt, and complete with brown winter gloves. Her dancing attire consists of a revealing red dress, a bright red flower in her hair, dark red high heels, and golden metallic bracelets.

Svetlana is a sexually deviated prostitute, who enjoys having unethical sex with men she does not even know. As good of a dance teacher as she is, she has no control over her sexual urges and often lets that overcome her, in the middle of her dance lessons. 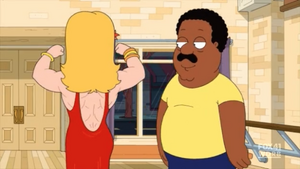 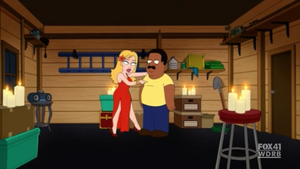 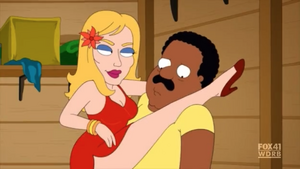