Use a virus to attack the Eastern Slav Republic (failed).

Svetlana Belikova is the main antagonist of Resident Evil: Damnation. She is the former president of the Eastern Slav Republic.

Little is known about her, though she is enigmatic and whether she is on the side of good or evil or somewhere between is a mystery. Svetlana is described as being diplomatic, serious, and very rigid. She amassed a great wealth from a financial businesswoman background. As the first female president of the Eastern Slav Republic, she is involved in a fight against terrorism.

After years of civil war caused by the poor people' independence movement in her country, Svetlana Belikova becames the first female president of Eastern Slav Republic.

Shortly after seizing power, she succeds in ending the insurgency by agreeing to a ceasefire, that allowed the insurgents some level of autonomy in the region they were concentrated within.

However, with the return of national industry into the region it was discovered that there was a large deposit of oil within the autonomous region.

Calculating a means of keeping the oil revenue without provoking a break-off of the autonomous region, President Belikova decided to have the secessionists eliminated. With the nation firmly 'safe', the Eastern Slav Republic would be in a much better situation to apply for EU membership. As an oligarch, the benefits of free international trade across the continent were.

In November 2010, she ordons to East Slavic military to began an anti-terror campaign against the secessionists. This decision served to radicalise the region by way of the Council of Elders, serving to create the very terrorists the military sought out to destroy. The United States took part in the campaign as part of the global War on Terror, aligned with the pro-government forces.

During the meeting with the council's elders and Ada Wong, Svetlana is given the information about the master-slaves symbiotic relationship between the Plaga-injected rebels and the Lickers which had been given subordinate Plagas, as well as a way to "create an master-slave relationship" between a human and a Bio-Organic Weapon (B.O.W). At first, Svetlana thought Ada Wong does work with the BSAA. However, she learnes from her secretary that there is no one by the name of Ada Wong working in BSAA.

Willing to interrogate Ada, Svetlana invites her to have a cup of tea. She asks Ada if Ada is working for Russia or America, to which Ada simply sais to leave it to Svetlana's imagination. The two eventually engaged in hand-to-hand combat, until a phone on her table rings, informing the terrorists have broken through her defenses. Svetlana manages to stop Ada's escape attempt by activating an elevator, which is actually her own office, descending into a laboratory located deep down beneath the president's palace.

Svetlana imprisones Ada and turnes her attention to defeat the terrorists once again. However, she escapes and reunites with Leon Kennedy. While disqussing with resistance leader, Alexander Kozachenko, Svetlana reveals that she compromised with the majority of the Council of Elders (with Ataman Judanovich being the only exception) with opposing further conflict by allowing them a share in the oil revenue, again playing to her public perception as a peacemaker.

By supplying elements of the forces with the Plaga parasites, Svetlana plans on using this in a public speech. It is also revealed that Svetlana planes to use B.O.W as a virus to attack the Eastern Slav Republic.

Afterwards she changes from her green attire into a purple one, as she practices a speech she has prepared to address the public. However during her speech she is informed by her assistant that the American and Russian soldiers have re-occupied the state in order to stop the B.O.W warfare. Eventually she is forced to resign by the joint forces of American and Russian soldiers.

Svetlana is a superb combatant, capable of incredible feats of speed, reflexes, timing and precision. Her skills at close combat exceed that of both Leon and Ada by far, allowing her to keep up with them with little to no effort. During her fight against Ada she disarmed her and performed strikes and holds with unparalleled precision and efficiency, while easily dodging every attack of Ada. Even when Ada had a knife Svetlana was able to doge and parry all of her slashes and stabs at close range using only a minum of movement, after which she took the knife from her in one fluid movement.

When Leon attempted to take her hostage she swiftly disarmed him. Svetlana dodged all of his blows and reversed all of his grappling attacks easily, catching his leg she tossed him multiple feet away to end the confrontation. 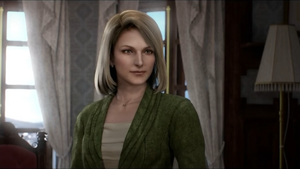 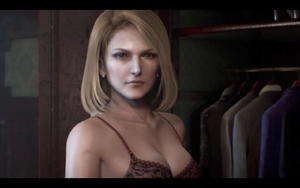