Aid Dorian Tyrell in his quest to obtain the Mask of Loki (failed).

Sweet Eddy is the secondary antagonist of the 1994 film The Mask. He is the right-hand man of Dorian Tyrell.

He was portrayed by the late Denis Forest, who also portrayed Systems Administrator in Eraser.

Sweet Eddy is very loyal to Tyrell and is one of the mobsters that tries to replace Niko with Tyrell as the crime lord of Edge City. This ruse was a secret until it was exposed by Niko's henchmen whose boss gave Tyrell a week to leave Edge City or he would kill him.

Unwilling to give up, Tyrell sent Eddy, Freeze and a few unnamed henchman to rob a bank that they examine earlier thanks to Dorian's moll Tina Carlyle. As they were about to rob the bank, they were stopped by The Mask who robbed the bank himself.

They retreated to the Coco Bongo where Eddy is the one who informed their boss. After the criminals arrived at the Coco Bongo, Freeze died of his wounds and they found that The Mask was at the club. Dorian and his henchmen confronted The Mask, but the aspiring crime boss was arrested for the bank robbery but the fingerprints didn't match so they were released.

Sweet Eddy was there when Tyrell puts on the Mask of Loki, making himself more bulkier and monstrous. He and his henchmen and Dorian frame Stanley for the bank robbery after knowing that Stanley is the culprit that the police are looking for.

They arrived at the Coco Bongo to finish the core with Niko. During the shootout, Niko and his henchmen were killed by Tyrell who later planted a bomb in the club. Tina kicked the Mask out of Dorian's hand and Sweet Eddy tries to get the Mask for his boss. The Mask was caught and worn by Stanley's dog named Milo. Eddy was beaten by Milo, but he was not out.

Stanley obtains the Mask and puts it on and confronts Sweet Eddy, Orlando and his comrades. They were later arrested by the police for their crimes after The Mask scares them with heavy weapons. 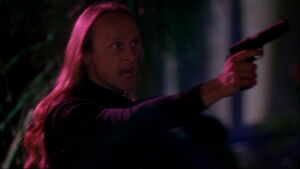 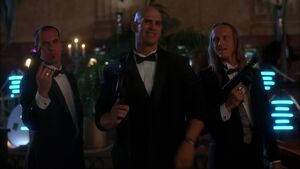 Eddy with Orlando and the other mobsters are glad at first, thinking that they've killed Ipkiss. 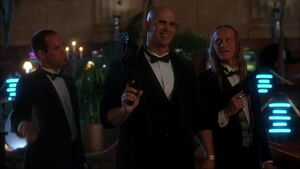 Eddy with Orlando and the other mobsters smiles triumphantly over Ipkiss' supposed death. 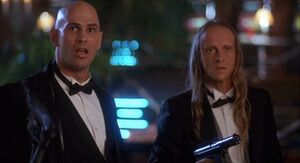 Eddy with Orlando, both shocked to learn that Ipkiss is alive and already with his mask. 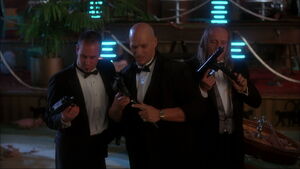 Eddy, Orlando, and the other mobsters frantically trying to kill Ipkiss in his mask form again. 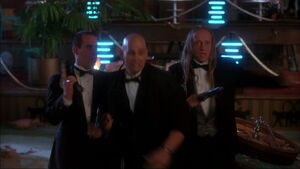 Eddy with Orlando and the other mobsters, scared at Ipkiss' heavy-loaded weapons. 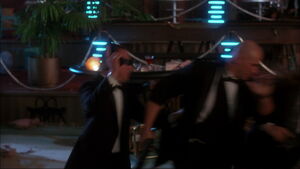 Eddy, Orlando, and the other mobsters running away fearfully. 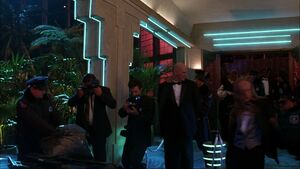