Ability to manipulate other birds with their beauty and angelic charm

Make deals with the godfather egg (Huevo Padrino) and her Vulture goons.

End Toto so that he does not have to beat the Bankivoide nor ruin her dreams of getting everything that she wants (failed).

Sweet Pea (also known as Chiquis in the original Mexican Spanish version) is the main antagonist in Huevocartoon's 3rd film Huevos: Little Rooster's Egg-cellent Adventure. She is a white peacock who appears as a singer in El Palenque. She is also the girlfriend of the great gamecock known as the Bankivoide.

She was voiced by Ninel Conde in the Spanish version, and Alyson Stoner in the English dubbed version.

When Toto was seeking to save his farm, after a costly debt to the owner of this, he decided to go to El Palenque (the arena) of Tepiscoelhoyo City, which would earn money being a fighting cock if he could overcome the powerful and invincible rooster called the Bankivoide, who also had a girlfriend named Sweet Pea which is a famous singer and exotic dancer who dazzles her beauty. In the course of the plot is discovered that Sweet Pea enthusiastically loved the Bankivoide only by fortune winning and extravagant luxuries that was, it used the Godfather Egg's vultures business for their dirty works, so leave the victorious Bankivoide.

On the stage they presented her to sing, attracting the attention of all the birds of the establishment (including Toto). finalizing his act, he stayed to autograph his admirers, back, Toto arrived timid and unsure of expressing his emotions. But in a state of fury, Di jumps towards her hitting her on the floor (being only part of what she imagined). On the other side of the door, The Bankivoide appears to receive it with affection, and mocking the unsuspecting cock, for later, challenge him to a boxing match. She, in the arms of her beloved, smiles with the certainty that she won the bet imposed by the Godfather Egg; as long as he does not play, he finds the loss of his fortune.

Discreetly, he sent the Godfather's Vultures to monitor the movements of Toto and his friends. By realizing how well you are progressing in your training, including the ability to fly. Reporting everything they saw to Sweet Pea, it would be a risk if he faced the Bankivoide, ordering to kill the rooster in the desert. Knowing that they could not manage to stop Toto, they changed their destiny to Pollón Farms, attacking the defenseless animals and their mother.

The most anticipated moment had arrived in which the two rivals would fight a battle in El Palenque, and Chiquis would be eager to witness of Toto's loses and home is purchased by Matías Jiménez, given that he also earns income with his pet. The result of the final round, gave Toto as the winner. As for Chiquis, they had discovered her because of the misdeeds she had committed, thanks to Cyclops telling Bibi the truth and that was how she was exposed. The two vultures took her to possibly arrest her, or take away his belongings and assets granted for the enriched livelihood of Bankivoide, leaving her in the street without money.

Sweet Pea is shown to have a seductive personality. She tends to be coquettish, flirtatious, irresistible and provocative at the time of singing and impressing those who marvel at her charm on stage, so she enjoys the praiseworthy adoration of her viewers, taking into account that also being the girlfriend between one. But great fighting cocks in El Palenque, taking into account that also being the girlfriend among one of the greatest fighting cocks, it is really not interest and not love, because of every success and fame that has earned the Bankivoide. Takes advantage of the privilege granted by this, given to understand that his true intentions were to keep his fiancé in the major leagues, getting rid of his rivals constantly in a cheeky and assumptive way to get all of the luxuries that she desires.

Sweet Pea is a white peacock with blue feathers, the top between his head, and uses jewelry necklaces with precious purple stones. 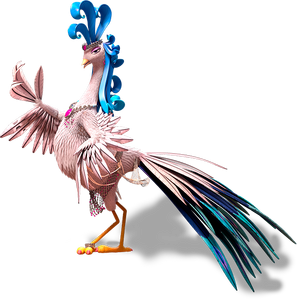 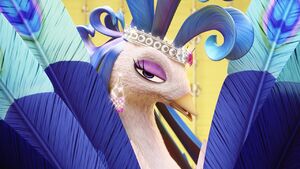 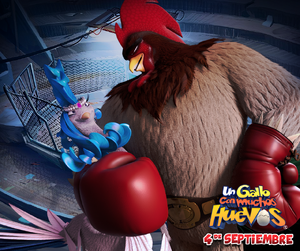 Sweet Pea and The Bankivoide. 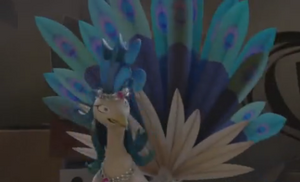 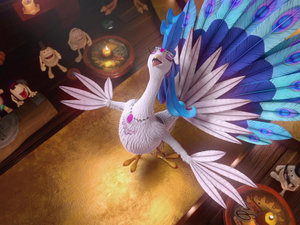 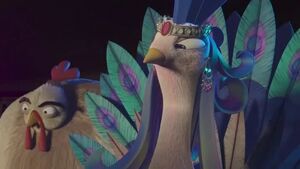 Chiquis witnessing the fight of Toto vs The Bankivoide.
Add a photo to this gallery 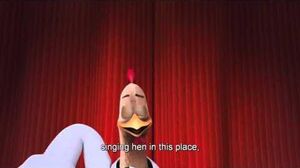 Chiquis baile
Chiquis singing I'm looking for a rooster.
Add a photo to this gallery

Retrieved from "https://villains.fandom.com/wiki/Sweet_Pea?oldid=4214255"
Community content is available under CC-BY-SA unless otherwise noted.