Sweet Tooth is a candy and glam-rock themed villain from Moshi Monsters with hypnotic powers.

They work at C.L.O.N.C., the same organization as Dr. Strangeglove does (C.L.O.N.C.), and is held in high regards by its members and leader. They also have their own brand of poisonous sweets, Dastardly Delights, and are an in-universe MonSTAR due to their affiliation with Simon Growl and the music album Music Rox!.

In the fourth mission of season one of the Super Moshi Missions, they poisoned candy and made monsters sick. They also briefly appear in the last mission to represent C.L.O.N.C.

In the fourth mission of season two, they were in disguise as Candy the Clown. They hypnotized an alien (Dr. C. Fingz) to make it believe it works for a circus under the name "Zoshlingo". Due to Fingz' mind reading abilities, it was able to figure out how many Moshlings a monster had. That way C.L.O.N.C. could steal them. A Super Moshi unmasked Sweet Tooth with the help of courageous Moshlings, but Sweet Tooth managed to teleport themself away.

In season 2, mission 10, they trapped the Zoshling alien crew and a Super Moshi with their sticky candy, but one of the aliens (Splutnik) could chase after Sweet Tooth with the help of its jetpack, and retrieved an important key.

In the third season, Sweet Tooth wears a snappy glam outfit and has a battle of the bands like showdown with pop singer Zack Binspin. Out-of-universe, there was a contest as well where members could hang either posters of Sweet Tooth or Zack Binspin into their rooms to support the MonSTARS. Sweet Tooth won said contest. 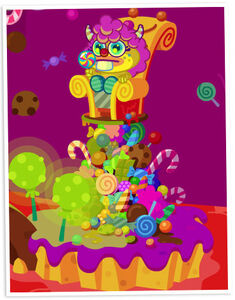 Sweet Tooth on their candy throne. 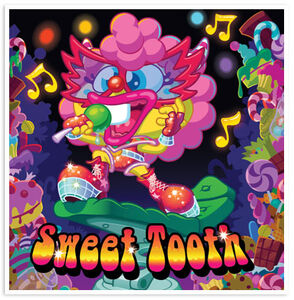