Marcus "Needles" Kane (also known as Sweet Tooth) is a psychotic clown who drives a modified ice cream truck and the protagonist villain and mascot from Twisted Metal series.

He was voiced by J.S. Gilbert.

Sweet Tooth was an escaped mental patient that entered the Twisted Metal Tournament, seeking the return of his best friend, Crazy Harold the Wacky Lunch Sack.

In his original ending, Calypso gave the bag to Sweet Tooth, though he found it to be a stupid request, only for the clown to start shooting at him. However, a woman that he was holding captive managed to free herself and held a gun to Sweet Tooth's head, telling him she was leaving and taking his truck with her.

In the ending that was put in the game, the wish goes like above except Sweet Tooth gets Crazy Harold the Wacky Lunch Sack and leaves.

Sweet Tooth returned to the next Twisted Metal tournament, this time wanting an escape from his madness. Thus in his ending, he asked Calypso to turn him into a bug to live out his days in a garden in the country. Calypso granted Sweet Tooth's request and he enjoyed his new life, far away from all who called him crazy. However, he had a habit of killing his fellow insects and whenever he grew lonely for humans or just their flesh, he would look up and dream of the day he crawled back into their world.

Sweet Tooth returned to compete in Twisted Metal yet again, now much more of a maniacal psychopath. In his ending, Sweet Tooth's wish was to eat all the sweets he wanted, which Calypso granted. However the clown ended up strapped into a dentist chair with drills trained on him and Calypso said he should've brushed between snacks.

Sweet Tooth serves as the main antagonist in the game. When Sweet Tooth was a child, the Twisted Metal tournament took place in his town and had an extreme impact on him. He had constant visions of death and mayhem and continued to follow the tournament for years until he finally was able to become a competitor. Sweet Tooth proved to be an extremely skilled competitor, taking out many opponents, but it soon lost its appeal. He realized that Calypso was just using him as a pawn to collect souls and become stronger. Thus when Sweet Tooth won the tournament, he used his wish to take Calypso's place as organizer of Twisted Metal. He was now the ringmaster instead of the clown, running things from his carnival like lair with his horde of clown minions. Sweet Tooth also served as the final challenge to any competitor who made it to the end with his upgraded ice cream truck. He also had Calypso's twisted sense of humor when it came to granting the request of the winner.

Sweet Tooth made his first kill with precise skill and no regrets, quickly deciding that it was his calling. He developed an intense blood lust and killed dozens of people, but was caught and sentenced to the electric chair. On the night of Sweet Tooth's execution, over a thousand people gathered to watch, though he was only disappointed there weren't more. However, Sweet Tooth was cursed by a preacher, which caused his head to be engulfed in flame, and he broke out of the chair, killing three police officers in a pain induced frenzy. Sweet Tooth eventually ended up in an asylum, where the curse caused him continuous pain that grew everyday, angering him and driving him more insane than ever.

However, Calypso showed up, offering Sweet Tooth a place in the Twisted Metal tournament. If he won, then Calypso would show the clown how to undo the curse and Sweet Tooth agreed to compete.

In his ending, Sweet Tooth went to Calypso to claim his prize and he gave the clown a vial containing the blood of the preacher who cursed him. Calypso told him if he drank it, the curse would be removed, but if he went back to his killing ways, the curse would come back. It took Sweet Tooth only 10 seconds to decide that he'd rather be cursed than give up his life as a killer. He smashed the vial and killed Calypso, resolving to be the greatest killer of all time. He drove away to accomplish this without hesitation.

Sweet Tooth was the youngest and most mischievous of the kids in the neighborhood. He entered Billy Calypso's tournament just wanting a little ice cream. In his ending, Calypso gave Sweet Tooth an ice cream truck, noting that he thought such a small request was stupid, but he strapped Calypso to the front of it and started driving around with police cars in hot pursuit.

Sweet Tooth, having competed in and won the Twisted Metal tournament many times, was revealed to be the split personality of another driver, Marcus Kane. However he grew tired of the repetitive pattern of the tournaments and decided that he wanted to control Twisted Metal.

In his ending, Sweet Tooth crashed into Calypso's lair and he asked the clown what his wish was. Sweet Tooth said he'd been getting tired of his face and noted how they'd be going through the same thing year after year. He then made his wish, that he and Calypso would change places. Calypso said he would never grant such a wish, but Sweet Tooth pointed out that he had no choice. The two suddenly morphed into each other and Calypso tried to order his guards to kill Sweet Tooth, but he had them kill Calypso instead.

In the Dark Tooth ending, he met up with his split personality when the two encounter the nonoperational Tower Tooth, who then separated the two personalities out of the original's mind by firing a laser blast that tore them apart. Marcus asked who he was, but Sweet Tooth replied that he was Marcus. Confused, Marcus wondered why this all happened, but Sweet Tooth persuaded him to forget it and the two climbed in Tower Tooth, operating it.

Sweet Tooth was once Marcus Kane, a middle-aged man who lived with his wife and three children and worked as an ice cream man for “Sweet Tooth's Ice Cream Company”. However Marcus constantly felt a burning emptiness within him that eventually formed into a dark split personality. This other personality wore away at him, until he finally snapped, carving his clown mask and letting the other personality take over to become Sweet Tooth.

He proceeded to murder his family with the exception of his daughter, Sophie, who managed to stab him in the eye with a pair of scissors and escape. Sweet Tooth eventually pursued her to a hospital, where he wiped out numerous patients, doctors, and police officers in his search for her. However Sophie had left before he arrived, becoming the only person to have ever escaped him, and Sweet Tooth continued to murder people, determined to one day find and slaughter her. He eventually learned of the Twisted Metal tournament and entered, so as to use the wish offered by Calypso to end his search and kill the "one who got away." His first match was in Sunsprings, California, where Calypso welcomed him and explained the rules. Sweet Tooth managed to win and continued to advance through the tournament. Finally, he headed back to Sunsprings for his final challenge, where he faced off against Mr. Grimm and his gang, who were using a pair of giant monster trucks. Sweet Tooth managed to take one down, prompting Mr. Grimm to activate a powerful suit of armor on the other, making it invincible to attacks. However Sweet Tooth's gunner had him get under the truck, allowing him to get under it and plant some C4. But when the gunner asked him to come back and pick him up, Sweet Tooth just detonated the C4 anyway, killing his gunner and destroying the armor, before he took down the last truck. He then went to Calypso, demanding to be sent where Sophie had been all these years.

However, she had killed herself before Sweet Tooth attacked the hospital, thus Calypso teleported him into her coffin, burying him alive. But Sweet Tooth had not killed his older son, Charles Kane, precisely so he could carry on his legacy if anything ever happened to him. His son headed to the grave and dug it up, taking his father's mask and lighting his head on fire, before racing off in Sweet Tooth's ice cream truck to kill Calypso and avenge his father. But after he left, Calypso went to the grave and brought Sophie back to life, wearing a clown mask and with her head on fire similar to the first Sweet Tooth, but was dubbed "Sweet Chick", serving as Calypso's enforcer and bodyguard.

Sweet Tooth is extremely twisted and psychotic, embodying hatred, mayhem, and destruction. He is a complete maniac who takes enjoyment only in spreading death and havoc. Sweet Tooth prides himself on being the greatest serial killer in history, willing to do anything to keep his title. He is also a very sadistic character and his mask suppresses his Marcus Kane personality.

His personality changes depending on what game he's in: in the first game, he is just an insane man who wants his paper bag friend back, in Twisted Metal: Head On, he alternates between a normal man and a vicious killer, and in Twisted Metal: Black, Sweet Tooth is purely a serial killer who only thinks about murder.

Sweet Tooth drives an ice cream truck with the same name that is equipped with Gatling guns on the sides and spikes on the front. It can fire the “Napalm Cone” from the clown head on the top, but later fires the clown head itself as a homing missile that can even pass through objects, called “Laughing Ghost”. The Sweet Tooth truck has also been able to transform into a robotic tower-like form with numerous missile racks and even an all out robot, called Sweet Bot, which can fly and slam onto the ground to unleash a shock wave attack. In Twisted Metal 4, the truck could attack by firing three orbs, one that trapped the opponent, and the other two attacked with missiles and flames. 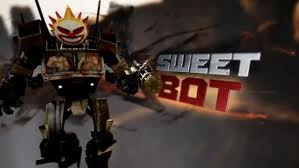 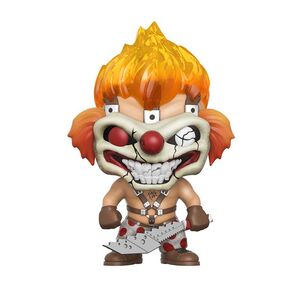 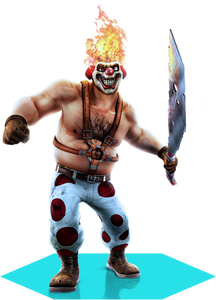