Enjoys eating candy and all sorts of sweet treats.

Eat all the candy in the world.

Sweetcheeks (sometimes spelled Sweet Cheeks) is a candy-powered clown-like supervillain and a villain in the Johnny Bravo cartoon series. He first appeared as the main antagonist of the Season 1 episode "Super Duped".

He was voiced by John Kassir.

Little is known about this fat, mischievous bozo other than his extreme hatred of all the people in the world and all that is good and that he has learned real magic which gave him superhuman abilities including telekinesis.

He was seen attacking Aron City (presumably located in Tennessee, U.S.A., due to being a nod to famous rock singer-songwriter Elvis Presley), joyfully robbing the town of both its money and candy supplies. As he was finishing robbing the local Aron City Bank and moved onto the next target in town after the Aron City Police Department went out for donuts under the ridiculous presumption and talk that there is a superhero in town (because Little Suzy made Johnny Bravo her "superhero" subject dubbed "Bravo Man" for today's show-and-tell classroom activity presided over by her teacher Ms. Ba-be at her kindergarten school), he was happily and skippily walking around as well walking all over Johnny Bravo who failed to halt him at the bank. During Sweetcheeks' candy-coated rampage, Bravo Man stands in his way, only to get whipped with his Licorice Whip. Sweetcheeks then targets the local Randy Corner candy store as he uses his magic powers to telekinetically lift the store with ease and fill his dark pink money sack with more candy treats before Bravo Man came in his karate outfit only to get kicked by Sweetcheeks and landing into a sewer within a nearby manhole. Though Suzy tries to lure Sweetcheeks towards the manhole for Johnny to jump up and beat him , unfortunately it did not worked as Johnny himself was bitten by a rat that crawled into his pants and this send him flying out of the sewers and into a mud in the city, forcing him to clean himself up. Little Suzy gets captured on the city streets by Sweetcheeks who threatens to magically transform her into a large chocolate bunny with an exceptionally large caramel center. One of Suzy's schoolmates finds Johnny tussling with a water hose in attempt to wash himself and tells him that the wicked Sweetcheeks got her, the obnoxious Bravo Man says "what cha say?" and inadvertently turns on the rushing water hose and sends himself flying around while saving Little Suzy and exposing the evil Sweetcheeks's weakness to water. 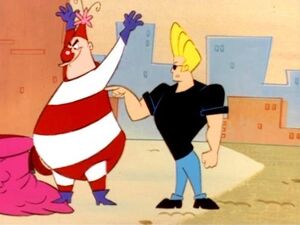 Retrieved from "https://villains.fandom.com/wiki/Sweetcheeks?oldid=3556026"
Community content is available under CC-BY-SA unless otherwise noted.