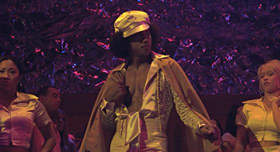 Sweetness is the main antagonist of the 2005 film Rollbounce. He is a five-year roller disco champion along with his crew, the Sweetwater Rollers in which he is the lead of.

Sweetness is portrayed by Wesley Jonathan.

Sweetness is arrogant and a showoff calling himself the king of Sweetwater and claiming he build Sweetwater, as well as having his own song. Sweetness is a charismatic ladykiller as the girls that go to Sweetwater treat him like a celebrity, and they all, including Tori and "X"'s sister Sonya, except Naomi, has feelings for him. Sweetness, however, does know when to show respect for someone that has great roller disco skills even though he won against "X" in their challenge.

After the Sweetwater Rollers and the Garden Boys competed with one another in a roller disco contest, it was announced that it turned out to be a draw, in which to Sweetness, he is surprised by this and makes arguments to "X" for having a draw and ask "X" to challenge him to a contest (just the two of them) and the winner takes all for their team.

Sweetness shows off his skating talents first and afterwards it comes down to "X" who comes up with some moves but after he does a couple of swirls, he falls to the ground, therefore Sweetness becomes the winner. After seeing how hard he was trying to win the contest, he pays his respect to "X" after he winks at him while one of Sweetness' crew starts laughing but stops him from continuing and walks away.

Retrieved from "https://villains.fandom.com/wiki/Sweetness?oldid=3185941"
Community content is available under CC-BY-SA unless otherwise noted.