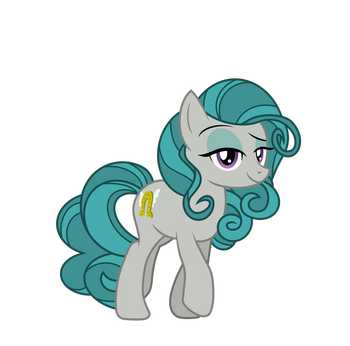 Swift Foot is the main antagonist of the My Little Pony: Friendship is Magic miniseries, Feats of Friendship. She is a member of the Thrace ponies who was sent by her father/king to infiltrate Princess Twilight's School of Friendship in order to dismantle the friendship of Equestria, only to realize how powerful it truly is and redeem herself.

Swift Foot resembles a regular Earth pony with a grey coat, a blue-green mane, purple eyes, and a cutie-mark showing a golden horseshoe with wings. However the mark is actually a sticker to hide her true mark depicting the symbol of the Thracian pony tribe. She also has sharp canines like the rest of her kind.

At first, Swift Foot appears to be sweet and friendly with a desire to learn about friendship, but this is a ruse to hide her true nature as a malicious secret agent whose true mission is to destroy it. She pretends to be friends with the Young Six while subtly planting seeds of doubt in their minds to turn them against eachother. However, after seeing how they make amends after arguing, she comes to understand how real friendship truly is and decides to support it instead.

Swift Foot is skilled in acting and manipulation, and has a telepathic link with her father, whom she reports to whenever she's alone.

Swift Foot was born the youngest daughter of King Diomedes of the Thracian pony tribe. However she was always treated poorly by the rest of her family, which includes her father as well as her three sisters; the oldest being Terri Belle, who is captain of the guard, and the twins Blonn Di and Shining Light.

One day, Swift Foot was informed by the twins that their father demands her presence, but they purposely took their time getting to her to make sure she is late for it. After being scolded by her father for her tardiness, she is then ordered by him and Terri Belle to infiltrate Twilight's School of Friendship during the time of their newly founded competition, the "Feats of Friendship", wherein she will become "friends" with the Young Six so she can destroy their bonds with eachother and thus the relationship between the ponies and other races. Though Swift Foot was hesitant at first, she accepts the mission out of fear.

Retrieved from "https://villains.fandom.com/wiki/Swift_Foot?oldid=3494547"
Community content is available under CC-BY-SA unless otherwise noted.