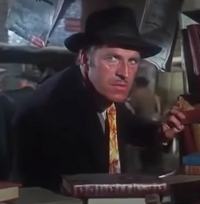 Swinburne is a minor antagonist of Disney's 1971 film Bedknobs and Broomsticks. He is a thug working for the Bookman.

He was portrayed by the late Bruce Forsyth.

It was told that Swinburne was aware of a feud between Professor Emelius Browne and the Bookman had over an old book containing magic spells, resulting a scuffle that tore the book in half. While Emelius took one half of the book to open and fund his correspondence school of witchcraft, the Bookman kept the other half in his shop at Portobello Road.

It wasn't until Professor Browne arrived to Portobello Road, bringing one of his pupils Miss Englantine Price and three orphans (Carrie, Charles and Paul Rawlins). Upon spotting them at a book shop where they are making inquiries about the other half of the book, Swinburne informs the Bookman before meeting up with them in person. Wielding a knife, Swinburne escorts the five to the Bookman's shop.

Upon learning that Price is looking for his other half of the book for the Substationary Locomotion spell, they both traded the halves, only to find out in horror that none of them contain the spell. However, Browne noticed a picture of the wizard Astoroth wearing a star, and Swinburne listens as the Bookman responded to both Price and Browne that the Star is the source of Astoroth's powers, and that Astoroth spend his last years in an uncharted island called Naboombu experimenting his spells on animals trapped in cages to become more like humans. The Bookman also informed that the animals broke free from captivity, killed Astoroth and stole his powers to create a society (currently ruled by King Leonidas) of their own.

The Bookman also told that the island of Naboombu doesn't exist, but Paul states that he has a children's book detailing about the island's existence. At first, the Bookman asks to see the book, but Browne and Paul refused, prompting an annoyed Bookman to wield out another knife and give it to Swinburne. However Price, Browne and the children escaped on their magical bed, leaving both the Bookman and Swinburne completely shocked.

It is unknown what happened to the Bookman and Swinburne afterwards.

Retrieved from "https://villains.fandom.com/wiki/Swinburne?oldid=4038474"
Community content is available under CC-BY-SA unless otherwise noted.