Swindle is a greedy con-artist Decepticon and is a major antagonist that appears throughout the Transformers franchise. Though his loyalties lie with Megatron, he is known for being a neutral weapons dealer who uses the war between the Autobots and Decepticons to his advantage by selling arms to both sides. He is also a Combaticon.

In the game Transformers, Swindle serves as a main antagonist in the Autobot campaign. This version of Swindle is actually more of a mindless army of drones, being several enemy squads of nameless, characterless foot soldiers used simply as a nuisance to stop the player from advancing.

There were Autobot counterparts used to battle the player in the Decepticon campaign as well, and both sides were voiced by Fred Tatascoire (grunts only).

After Megatron was crushed into bits and Starscream took over his former master's position, he tasked the Combaticons with intercepting an Autobot transport. Onslaught tasked Swindle with patrolling the area to take out any scouts who might give away their operation. Though they successfully destroyed the bridge, the diverted transport still had plenty of anti-air defenses to keep Starscream's aerial forces at bay, and as such Swindle was sent in. Driving underneath, he demolished the transport's wheels before taking on a pair of titans. The transport converted to a flight mode, so Swindle grappled on board and started taking out the transport's anti-aircraft cannons by blowing up their ammo. Working his way around to the other side of the ship, he discovered that the Autobots had destroyed the controls for the shields so he couldn't blow them up, triggering him to instead join the other Combaticons on their drop ship so they could take it out.

The team combined into barbaric Bruticus and stormed through the rest of the Autobot defenses, though in the process they damaged the transport so badly that it crashed, making the enraged Starscream have the Combaticons' arrested. Swindle and the Combaticons were later freed when Megatron was resurrected and kicked a defeated Starscream into hiding. They were aboard the Nemesis, a permanently transformed Trypticon flagship, as it pursued the Autobot's Ark. Swindle took part in the assault on the Autobot ship's engines as part of Bruticus. The giant took out many Autobots before he was taken down by the combined efforts of Jazz and the Aerialbots, the thwarted barbian flying into a mysterious black hole along with the rest of his Autobot and Decepticon peers alike. 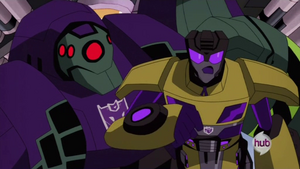 Retrieved from "https://villains.fandom.com/wiki/Swindle?oldid=3399349"
Community content is available under CC-BY-SA unless otherwise noted.