Robbing people and houses.
Traveling to towns and evading capture by local authorities.

To rob whatever town he travels to and rob their citizens blind of their precious possessions and get rich (succeeded briefly; ultimately failed).

Kidnap Dennis and take him on the road with him as a long-term hostage (succeeded at first; ultimately failed).
Kill Dennis and anyone else who gets in his way (failed).

Switchblade Sam is the town-robbing criminal and the main antagonist of the 1993 John Hughes family film Dennis the Menace, which is based on the American comic strip of the same name. Unlike the other characters, Switchblade Sam was never referred to by his name, neither when spoken to nor when spoken about.

He was portrayed by Christopher Lloyd, who also played other villains, such as Judge Doom in Who Framed Roger Rabbit, Merlock in Disney's DuckTales the Movie: Treasure of the Lost Lamp, Rasputin in Don Bluth's Anastasia, The Hacker in Cyberchase, Lord Imaru in The Secret Treasure of Machu Picchu by Golden Films, Stan Cruge in Santa Buddies and Kruge in Star Trek 3.

Switchblade Sam is first seen travelling clandestinely on a train. At one moment, he decides to jump out from it and it turns out that the train was exactly at Dennis Mitchell's village. Sam arrives in the village and is more than happy because he notices people never lock their doors (probably because the crime rate is non-existent) so he could steal nearly whatever he wants.

Taking advantage of the situation, Switchblade Sam commits a series of robberies in the village and is noticed by the police chief, who asks him to leave if he is going to be just trouble. His robberies include a doll and an apple.

One day, Dennis' neighbor and frequent victim, Georges, is chosen to host his garden club, having spent nearly forty years cultivating a rare orchid that will finally bloom at night. During the party, Dennis opens the garage door, which knocks down the entire refreshment table, and is sent inside as punishment. While Georges, his wife and their guests await the flower's nighttime presentation, Switchblade Sam decides to rob the Wilson's house. Sam searches the house thoroughly, finding nothing of interest at first but he finds Georges's collection of old coins. Fascinated by that, he quickly steals it and runs away before Dennis comes down and notices the theft. Alerting George of the crime, Dennis distracts everyone from the flower's brief bloom. Enraged, George tells Dennis he is a pest and that he does not want to see him and talk him again. Dennis, deeply hurt by Wilson's words, runs away into the woods in sadness and is grabbed by Switchblade Sam.

Switchblade Sam has decided to leave the town before the police monitores him too much. He decides to make Dennis his hostage. However, Dennis quickly annoys Sam who decides to tie him up, but Sam loosely ties Dennis in the good way, as he unties himself without difficulty. Showing Sam the correct way to tie him up, Dennis handcuffs his captor, loses the key, unintentionally bludgeons him, and sets him on fire. These funny acts drives Sam into a murderous rage. Just as Dennis discovers George's stolen coins and realizes Sam is the thief who robbed the Wilsons, Sam attempts to murder Dennis by stabbing him but is trapped in a rope caught by a passing train. The next morning, Dennis returns home with the captured half-conscious Sam. Sam is taken into custody, and Dennis naively returns to him his switchblade. As a final act of revenge, Sam attempts to stab him with it, but the policeman Chief Bennett closes the police car door on Sam's hand so he drops the knife in the sewer and moans in pain before being driven to the post. Although not shown in the movie, Sam will likely be imprisoned for his crimes.

He is a traveling vagrant and robber (though that criminal "profession" goes by another term "thief") who is not against violence - in fact, he is aptly named as he carries around a switchblade knife (hence the name) with him and has no problems with threatening children in order to get what he wants.

Despite the comedic nature of the film, Switchblade Sam was actually a rather dark, dangerous, and intimidating villain, at least until Dennis (unintentionally) found ways to outsmart the criminal, after which he lost his threat status, as he became the focus of numerous slapstick mishaps in a manner similar to Harry and Marv from the first two Home Alone movies.

Where Switchblade Sam is from remains unknown, but he's most likely not from Chicago. That assumption can be supported by the fact that, after he had jumped out of a train, Switchblade Sam described the city as a "pretty sight" where people "don't even lock their doors", as well as the fact that, when he was first confronted by the police who didn't recall ever seeing him before, Switchblade Sam claimed, "Maybe that's because I ain't never been around here." 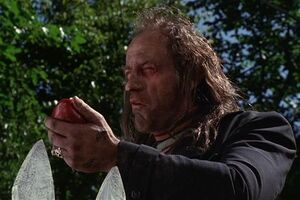 Switchblade Sam after having stolen a toddler's apple with a sharp knife. 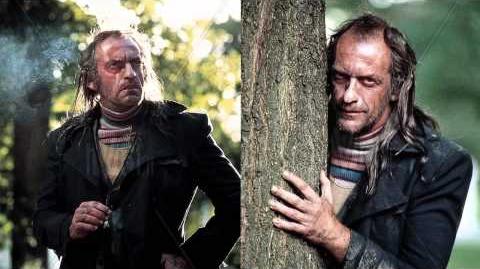 Switchblade Sam's theme from Dennis The Menace by Jerry Goldsmith 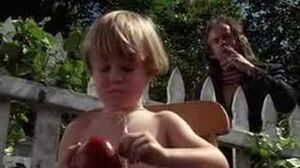 Dennis the Menace - A Apple 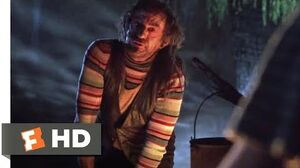 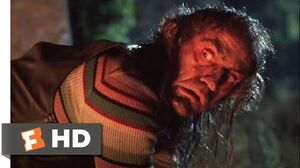 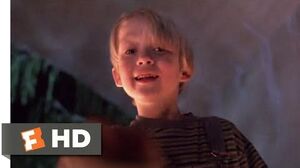 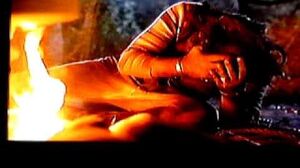