Working in the sewers and listening to Sammy's songs (formerly).

Steal Henry's valve and get away from him (failed).

Jack Fain, later known as Swollen Jack, is minor antagonist in the 2017 horror video game Bendy and the Ink Machine. Jack Fain was introduced in the Chapter 4 update for Chapter 2 as the former Lyricist of Joey Drew Studios before being corrupted into an ink monster, much like the Searchers.

He was voiced by Bookpast, who serves as one of the developers of Bendy and the Ink Machine.

Jack Fain appears as a standard Searcher, except he wears a bowler hat on his head and drops it when he's killed.

Formerly the lyricist of Joey Drew Studios, Jack Fain would often listen to Sammy Lawrence play his songs while he worked in the sewers. At some point he was corrupted by the Ink Machine and turned into an ink monster.

30 years later Henry returns to the studio and finds Swollen Jack with his valve after breaking through some old wooden boards. Jack will constantly pop out from the ink with the valve as Henry chases him, forcing him to lead Jack under a wooden crate and pull a lever to crush him, giving him the valve. Before Henry leaves he apologizes for killing Jack and then remarks on how nice Jack's hat is. 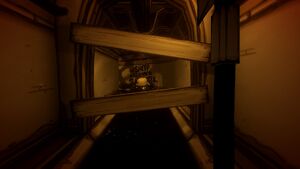 Swollen Jack behind the boards. 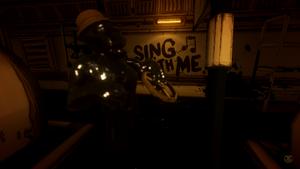 Swollen Jack about to hide. 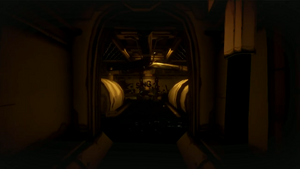 Swollen Jack seen at the end of the flooded hallway. 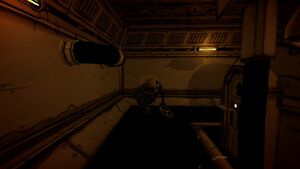 A view of Swollen Jack at the left of the flooded hallway. 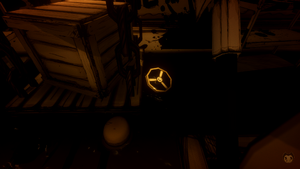 A hat and turnwheel left after Jack's death. 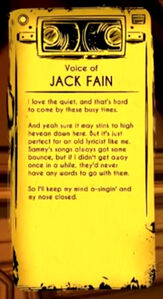 Jack Fain's audio log.
Add a photo to this gallery

Retrieved from "https://villains.fandom.com/wiki/Swollen_Jack?oldid=3888187"
Community content is available under CC-BY-SA unless otherwise noted.