Doctor Who: The Christmas Invasion

Having both endoskeletons and exoskeletons

Wearing the ribs of their wives as a marriage bond

The Sycoraxs were a superstitious race of warriors and intergalactic plunderers, They first appear in the first ever Doctor Who Christmas Special called "The Christmas Invasion". They later briefly appeared in the episode "The Pandorica Opens" as part of the alliance and helped trap the doctor in the Pandorica.

In 102, the Sycorax were among the races who joined the Alliance. They came to Stonehenge and helped imprison the Eleventh Doctor in the Pandorica to "save" the universe.

In The Christmas Invasion, at Christmas 2006, a tribe of Sycorax, led by their leader, Fadros Pallujikaa, attempted to invade Earth, from their asteroid ship, which crossed the Solar System and eventually crashed into Earth's atmosphere. Pallujikaa and his shamans used a sample of blood control (obtained from a phial of blood in a Great British probe sent to Mars) to hypnotise one-third of the human race (all those with A+ blood, the same as in the probe's phial) and make them walk, trance-like, to high edges across the planet. Pallujikaa then threatened the world, to make the possessed humans kill themselves by falling to their deaths, unless the entire planet surrendered and gave them half of the population, to be sold as slaves.

The Sycorax picked up a signal from the TARDIS' advanced technology and teleported the TARDIS (along with Rose Tyler, Mickey Smith and the Tenth Doctor inside of it) to their ship. The Doctor, awakened from his regenerative slumber, activated the blood control matrix, but the possessed humans didn't fall to their deaths; instead, they were freed and came to their senses, as the Doctor knew all along that the human race's strong survival instincts would break free the blood control.

The Doctor then challenged Pallujikaa to a sword duel for the Earth; despite having a hand cut off and then growing back, the Doctor won the sword duel and ordered his opponent to leave Earth, with his tribe, and never return. The Leader agreed, and the Doctor spared his life and walked away. However, the Leader lied, and charged at the Doctor from behind with his sword in the air. Without even turning or breaking stride, the Doctor threw a satsuma at a button and then the part of the wing that the Leader was standing on opened and the Sycorax Leader fell screaming to his death.

The Doctor told the rest of the Sycorax to tell others about the stars and Earth is defended, as well as reiterating the fact that they could never return, before leaving, with Rose, Mickey, Harriet, Harriet's assistant Alex and the TARDIS. However, when the Sycorax ship was still leaving Earth, Harriet Jones ordered Torchwood to fire a salvaged Jaatha Sun Gilder ray at the Sycorax ship, causing it to explode and killing all the occupants. This eventually led to Jones' own downfall as Prime Minister of the United Kingdom. 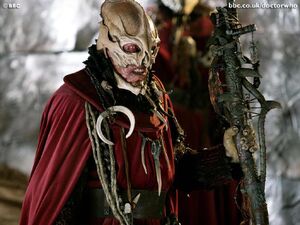 The Sycorax Leader
Add a photo to this gallery

Retrieved from "https://villains.fandom.com/wiki/Sycoraxs?oldid=3452806"
Community content is available under CC-BY-SA unless otherwise noted.