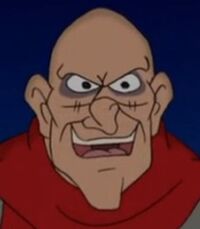 Sykosus is the main antagonist of the 2008 direct-to-DVD film At Jesus' Side.

He was voiced by David Kaye, who also voiced Evil Dragon from Teen Titans Go, and one of the Blood Brothers from Marvel Comics.

Retrieved from "https://villains.fandom.com/wiki/Sykosus?oldid=3775046"
Community content is available under CC-BY-SA unless otherwise noted.