The Banshee Queen
The Dark Lady

Queen of the Forsaken

Defend her home, Quel'Thalas, from the Scourge in life (failed).
Kill Arthas Menethil in revenge for resurrecting her as a banshee (failed).
Commit suicide following Arthas's death (formerly).
Lead the Forsaken to victory and defeat the Scourge.
Gain full control of the Val'kyr by enslaving the Val'kyr Queen (failed, was halted by Greymane)
Serve the Jailer and create a world freed from fate (abandoned).

Sylvanas Windrunner is the ruler of the Forsaken and one of the main antagonists of the Warcraft franchise. As of World of Warcraft: Legion, she is the new Warchief of the Horde.

She is voiced by Patty Mattson.

During her lifetime, Sylvanas had long blonde hair that "floated like water" and was "translucent in sunlight". She took great care of her appearance: "It wasn't enough for her to be the best huntress in the family. She also had to be breathtakingly beautiful for all those who had the honor of meeting her. She was of such vanity." Her eyes were "grayer than green or blue."

After becoming a banshee, Sylvanas now has pale, bluish skin, although she is in better conditions than most of the other undead who are visibly decaying in appearance. Her skin shines with a white or silvery glow that becomes red when she is agitated. Her hair, once blonde, is now black as night and strewn with white locks. Sylvanas still wears the garment she was wearing at the time of her death, although her coloring has been darkened. For some reason, her body bears no scars from the countless wounds she received on the day she died. As when she was alive, she prefers to remain hooded.

Sylvanas carried with her the Sunstrider's Longbow, which once belonged to Dath'Remar Sunstrider, who gave it to Sylvanas when she became Ranger-General. At some point, she discarded her previous bow and started using a new one called the Deathwhisper from Icecrown Citadel.

Sylvanas' armor consists of a detailed chest plate that exposes her toned midriff and greaves atop a light, green cotton trousers. Her gauntlets are decorated with a large gem on each, and her spaulders are adorned with spikes, skulls and white feathers than match her own blanched hair. She wears a crimson hooded cloak, tattered and ripped at the bottom, the hood of which is nearly always up. She keeps her quiver and her bow slung across her back most of the time, and can often be seen with her two blades sheathed at her waist.

Sylvanas Windrunner was in a family with two other sisters and a brother. One of her sisters, Alleria, went missing during the Second War, her other sister, Vereesa, is the current Ranger General of the Silver Covenant, and her brother, Lirath, was murdered by Orcs. Sylvanas became the Ranger General of Quel'thalas, the kingdom of the High Elves.

During the second war, most of the high elves forces were sent to help the Alliance. Some time after this, the Eversong forest began to mysteriously burn, it turned out that the Horde was planning to invade the kingdom of Quel'Thalas. Alleria Windrunner, Sylvanas' sister, managed to notify Sylvanas of the Horde's plans and after many battles, the Horde had to retreat. Soon afterwards, the Dark Portal was destroyed and the war was over. Sylvana's youngest brother Lirath was killed when the Horde attacked the Windrunner clan, Alleria swore to avenge the death of their younger sibling.

Then came the day she had feared so long when Arthas Menethil, the traitor of Lordaeron arrived at Quel'Thalas with his army of undead, the Scourge. She encountered Arthas many times during the battle, Arthas started the invasion attacking small villages in the area, killing everyone he came across.

Sylvanas and her troops moved to try to chase him out of the kingdom but his forces were far too powerful. Sylvanas and her troops therefore moved further into Quel'Thalas to try to defend Quel'Thalas inner gate. Sylvanas chose to destroy the bridge that led into the kingdom and then locked the gate with the key of the three moons. The key was destroyed and the three parts were hidden deep in the forests.

However, Arthas managed to gather all the parts of the key and led his army into the heart of Quel'Thalas and its capital, Silvermoon. Sylvanas sent runners to alert Silvermoon about the invasion but the runners never showed up. Sylvanas and her troops fought bravely in battle, but Arthas and the Scourge managed to overpower the remaining of her troops and she was eventually killed by the ruthless death knight.

At the death knight's mercy, Sylvanas begged for a quick and peaceful death, but Arthas growing annoyed of her efforts to stop him, decided to raise her into undeath as a banshee, and became one of his top lieutenants, along with the Archlich Kel'Thuzad.

The Lich King's powers were waning and with them, Arthas’ powers. Sylvanas found herself regaining control and along with many of her loyal banshees began making plans for Arthas’ demise. She agreed to ally with the dreadlords who also sought Arthas’ death, but on her own terms.

Sylvanas had taken the opportunity presented by the Lich King’s waning power to reclaim her body. Using the powers Arthas had granted her, she possessed it and once again walked in flesh — albeit dead flesh. As Arthas had sought to mock and torment her, now Sylvanas returned the favor, firing a special poisoned arrow into him that paralyzed the traitor prince of Lordaeron. He bellowed in rage and demanded that she finish him off, but she reminded him of his words to her when she’d demanded a clean death. She had no intention of granting him death at all. She would, instead, make him suffer.

Intending to settle down to a long period of torment, Sylvanas was interrupted by the Kel’Thuzad, who destroyed her banshees and forced her to withdraw. Soon Arthas was gone from Lordaeron, striving to return to Northrend and the Lich King. This left Sylvanas in an unusual position. The three dreadlords who allied with her now sought utter control of Lordaeron, yet the Scourge no longer held the region. Those converted to undead by Arthas were slowly becoming free of the Lich King’s grasp, and these forsaken souls regained a measure of their former selves only to find themselves trapped in a horror of an existence. Sylvanas could understand it all too well. Dominated by the Lich King, she’d had no choice but to follow a dangerous tyrant, but now she could decide for herself what course of action to take.

During the final days of the War Against the Lich King, Sylvanas took part in the final battle at Icecrown Citadel, where a brave hero presented to her a vial of her blood which was found on the corpse of Arthas himself. She returned to the Undercity to plan for the future, where she led an attack on Andorhal. The Scourge remains and an Alliance army were there, as well, and Sylvanas was forced to fight both of them. The Scourge leadership was taken care of quickly, but the Alliance was more resilient. Sylvanas, learning that her top Death Knight Koltira Deathweaver had a friendship with the Alliance Death Knight Thassarian, brought her Death Knight champion back to the Undercity to warp his memory of his friend through torture.

Her war crimes, repugnant even to other Horde members and to an embattled world, were already apparent before the advent of the Lich King. Sylvanas maintained extensive slave pens in Undercity where captives from all of Lordaeron were brought to be tortured, vivisected and experimented on, an action Thrall's knowledge would likely result in the Forsaken's expulsion from the Horde, if not outright destruction. Her methods of using human, dwarf and even orcish captives as experimental subjects for her plagues, as well as usage of plague on several cities are an often overlooked/ignored aspect of her due to her popularity by fans regarding her villainousness.

More recently, Sylvanas launched a genocidal attack on the Night Elf homes of Teldrassil and Darnassus, completely destroying both and killing any who did not escape in time. This atrocity against her own race of origin provoked a new wave of Alliance-Horde hatred and violence, sending Azeroth into bloody warfare once again. 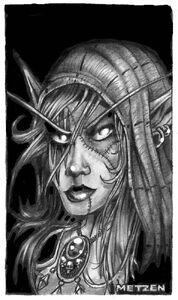 Sylvanas in an early sketch by Chris Metzen 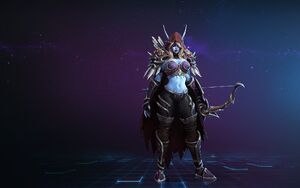 Sylvanas in Heroes of the Storm. 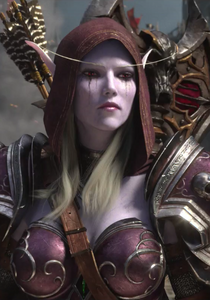 Sylvanas in Battle for Azeroth. 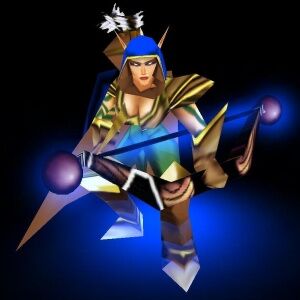 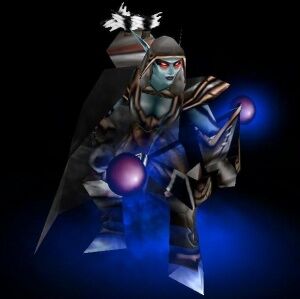 Sylvanas as the Dark Lady. 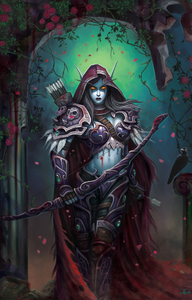 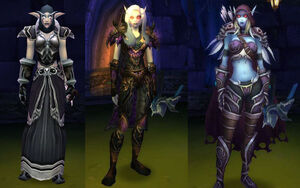 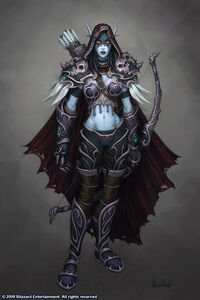 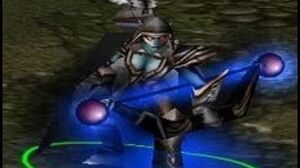 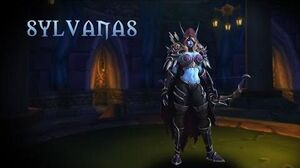 Heroes of the Storm - Sylvanas Trailer 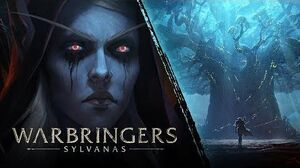 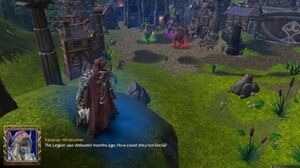