He usually fails in his attempts to eat the bird from his owner, Granny (who owns both Sylvester and Tweety as pets), often getting hit by her with a broom or getting punched by Hector. At times, he can be seen to be good by teaming up with the other Looney Tunes in such features like the 1996 film Space Jam. However, on other occasions, he does appear as a downright villain such as appearing as the main antagonist of Tweety's High Flying Adventure. He successfully ate Tweety in the 2002 webtoon Twick or Tweety.

Sylvester also tries to eat Speedy Gonzales, but always fails due to the fast little mouse constantly outrunning and outsmarting him.

Pitted against Tweety, Sylvester is a violent but awkward predator. He is a work-shy mouser and an amateurish hunter, so his focus on catching Tweety is mostly obsession. Like Wile E. Coyote, Blue Aardvark, and other cartoon hunters, Sylvester's reason for being is to catch and kill the little creature who always escapes him, and is always doomed to fail. Also like these characters, he’ll use any means possible to catch his prey, by carefully placed traps, brute force, disguises or mail-order weapons.

As a cat, Sylvester is terrified of dogs. When out of their reach, Sylvester tossed a flower vase to them and yell at them "Ah, shut up." to keep their "ugly" traps shut.

In the cartoon Satan's Waitin', he’s killed in one of his attempts to catch Tweety, and is sent to Cat Hell. Since he has nine lives, he is allowed to go back, but only because the Devil Dog plans to manipulate him into hurrying his other lives along. When seven of his other lives are lost in more attempts to eat Tweety (due mainly to the Devil Dog tricking him into making these other attempts), he realizes his trick, decides to give up chasing Tweety to save his last life, and makes a home in a bank vault. This backfires when two robbers blow up the vault, sending themselves and Sylvester to Hell.

Sylvester's personality in the early shorts tends to vary depending on which director handled him. Friz Freleng first paired him against Tweety Bird and Speedy, but other directors paired him with other characters. In Bob Clampett's cartoon Kitty Kornered, Sylvester teams up with other cats to lock Porky out of the house in revenge for putting them out for the night.

In other various cartoons/episodes, Sylvester is usually the main protagonist.

Robert McKimson gave Sylvester a son named Sylvester Jr., who Sylvester tries (and fails) to train in mouse-catching. These cartoons also pit him against Hippety Hopper, a baby kangaroo Sylvester always mistakes for a giant mouse.

In Chuck Jones' shorts, he is Porky's cowardly pet cat, and most differently, does not speak. These are cartoons that show Sylvester as a hero, trying to protect an oblivious Porky from danger all around him. However, he did appear in a villainous role in one Jones short The Scarlet Pumpernickel, which was his most villainous role ever as he wields a sword, and shows signs of being a pervert and even a rapist. Fortunately, most of the short was a show within a show.

In the 60s, Sylvester was temporarily retired as Speedy's foe with Daffy Duck taking the role. The passing of the torch is referenced in It's Nice to Have a Mouse Around the House where Granny hires Daffy as an exterminator to deal with Speedy as Sylvester needs to take a vacation due to a nervous breakdown.

Interestingly, Daffy Duck proved to be a far more cruel and effective villain then Sylvester had been; Daffy stooping to the lengths the cat would never go and succeeding in a few cartoons. 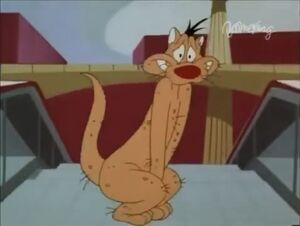 Sylvester naked
Add a photo to this gallery 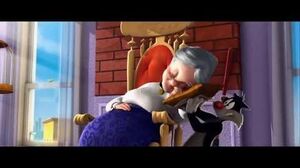 Retrieved from "https://villains.fandom.com/wiki/Sylvester_J._Pussycat_Sr.?oldid=4362870"
Community content is available under CC-BY-SA unless otherwise noted.