Agent of the Vishkar Corporation

Creating whatever she wants.

Working for Vishkar Corporations and help them do what she thinks is right.

Shape the perfect society and make the world a better place.

Satya Vaswani, also better known as Symmetra, is one of the playable characters in Overwatch. She is a member of Vishkar Corporation, a corrupt corporate entity that creates one of most advanced technology in the world. She is the archenemy of Lúcio.

She was voiced by Anjali Bhimani in English and Zhang Yu in Chinese, the latter voicing Mei in both the English and Chinese versions.

Satya Vaswani was born to a very poor family in Hyderabad. She was identified as a potential future light-bending architect for the Vishkar Corporation, and was put into the company's architect academy in Utopaea. Though she could never return home, she became one of the top students in her class, using dance techniques for light-bending instead of more procedural motions.

Vishkar gave Satya a position as a surreptitious and clandestine agent under the name 'Symmetra'. She was sent on covert missions around the world to uphold the company's interests by sabotaging competitors and negotiating with contractors.

In A Better World, Satya was sent to Rio de Janeiro to negotiate a contract with its mayor. When she instead chose Calado's proposal, Symmetra infiltrated his tower, but was unable to find anything that is questionable and doubtful. Sanjay Korpal opted to destroy the building instead, and Symmetra had to save people from its flaming wreckage. Vishkar's city center was completed months later.

From Lúcio's point of view, we learn that Vishkar tried to control people in Rio de Janeiro, by establishing curfews, forbidding various behaviors, or even using inhabitants as cheap workforce. He was the leader of a riot that freed the city, which made Symmetra despise him.

As far as we know, Satya is unaware that the actions of the corporation are antipathetic.

Symmetra's main attack is a laser with an aimbot, which guarantees the player to do damage on a short-to-mid range. The longer it stays connected, more it will damage its target.

It can also fire slow photon spheres that can do high damage at distance.

Symmetra can deploy up to six little turrets at once, which connects to nearby enemies and do continuous little damage. They can be used to alert the player of an enemy's presence, or to hold a point and allow her team to do a high amount of damage.

Symmetra can launch a moving barrier that will absorb incoming damage up to 1000 health points.

Symmetra is the only character that has two ultimate ability. The first one is a teleporter pad, which able her team to travel from the spawn to where it has been placed. Once Symmetra establish her pad, it holds six places. Once used six times or destroyed, the pad will disappear and Symmetra will have to charge another one.

Symmetra's second ultimate ability is a pad that will grant her entire team a bonus of 75 shield points in a certain area. If during a certain amount of time the shielded player has not been damaged by an enemy, the shield will restore themselves. It will last as long as the objective doesn't change and as long as it has not been destroyed. 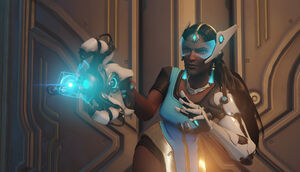 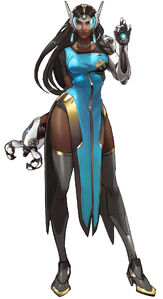 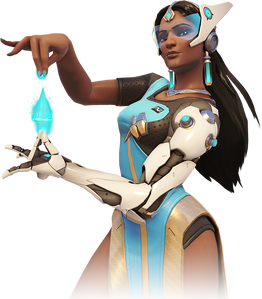 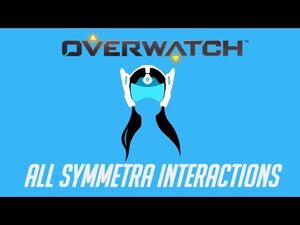