To destroy all supers and sell people dangerous weapons ⁽ᶠᵃᶦˡᵉᵈ⁾

Attempted Familicide
Theft
Almost Everything the Original Syndrome did ⁽ᵖᵒˢˢᶦᵇˡʸ⁾

Syndrome is the main antagonist of LEGO The Incredibles. He is Mr. Incredible’s former biggest fan-turned-arch-nemesis.

He was voiced by his original actor Jason Lee.

Just like his other self. Syndrome is sadistic, devious, sly, and a little bit of a smooth-talker. As Buddy Pine, he was charming, clumsy, and slightly neurotic tween. But when his dreams of being the sidekick to Mr. Incredible turned sour, his perception of supers (and himself) were warped beyond belief.

After Mr. Incredible found Bomb Voyage, Buddy Pine came to help him and while they were talking, Bomb Voyage took advantage of the fact that he was distracted to escape but the two managed to defeat him as a team, as soon as Buddy Pine went to call the police, Mr. Incredible went after him to remove a bomb that got stuck in the cover, after saving him, he handed Buddy Pines to the police to take him home.

After being rejected by Mr. Incredible, Buddy Pine decided to become a supervillain and changed his name to "Syndrome".

Formulating a Plot for Glory

Many years later, Syndrome created the Omnidroids, discovered the secret identities of several Supers (including Gazerbeam) and lured them to be killed, after discovering the identities of Mr. Incredible and Frozone, they lured the two to Nomanisan Island to face two Omnidroids 08, however the two Omnidroids were defeated and after two months, Mr. Incredible (now thin again) returned and Syndrome used Omnidroid 09 to attack him for a while before stopping to talk to him and using zero -point to hit him on the ground until he accidentally released him, Mr. Incredible jumped out of a waterfall and Syndrome threw a bomb down causing a big explosion before leaving.

Mr. Incredible found Gazerbeam and together they discovered Syndrome's plans before they were caught, so Syndrome went to ask Mr. Incredible (now alone) what he contacted in which he replied that he did not contact anyone, when Elastigirl was coming to rescue him Syndrome sent some missiles and the plane was destroyed, however Elastigirl and her children (who had followed her) managed to survive.

When the Incredibles managed to join the four, Syndrome caught all four using the zero-point and held them all upside down, Syndrome explained his plans to the four and forced them to watch the news before leaving, upon arriving in the city he saved four people from being crushed by a hot dog cart using the zero-point and went to face the Omnidroid 10, unfortunate for him, the Omnidroid realized he was being controlled by the control and attacked Syndrome until he was unconscious.

After Omnidroid 10 was defeated, Syndrome recovered and was angry that his plans were thwarted by Incredibles.

When the Parr family returned home after destroying the Omnidroid, they find the interior of the house covered in scorch marks before Syndrome stumbles into view admitting defeat and tells the family he will go into hiding. He also mentioned that they should tip their babysitter more, implying that Jack-Jack had already gotten the better of him.

He broke into an abandoned warehouse and caused his henchmen to steal various technologies to build a new Omnidroid so he could take over the city, however Mr. Incredible and Elastigirl managed to defeat him and he was arrested in the end. 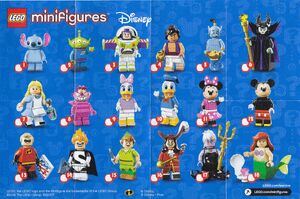 Retrieved from "https://villains.fandom.com/wiki/Syndrome_(LEGO_The_Incredibles)?oldid=4261392"
Community content is available under CC-BY-SA unless otherwise noted.