Collected data from other universes

Making the competitors of the Cross-Tag Battle Tournament fight to gather data.

Conquer the four worlds and use them to create new possibilities.

System No. XX is the main antagonist and final boss of BlazBlue: Cross Tag Battle. It is a machine originally designed by Clavis Alucard to create new possibilities. However, a flaw in its design led to the machine invading the worlds it observed and using them as power bases. To prevent the machine from destroying worlds to create new ones, Clavis sealed the System away using the Keystones of the four selected universes (BlazBlue, Persona 4: Arena, Under Night In-Birth and RWBY).

However, the seal on System No. XX was accidentally undone by Clavis Alucard's daughter, Rachel Alucard, leading to the machine summoning warriors from the four selected worlds and having them fight in Tag Battles in the "Keystone Tag Battle Tournament" inside the Phantom Field, telling them lies as they need to collect the 4 Keystones in order to escape and go back home to their universes.

She is voiced by Carrie Keranen.

There are multiple endings, depending on which Episode the player chooses.

Episode BlazBlue has three separate endings, depending on what choices the player makes in the last few scenes of the story. If the player picks Noel as his partner in the fight against System, then after being returned to his world, Ragna will leave Noel in a field to be picked up by Makoto Nanaya. If the player chooses Rachel, then System will be sealed away after its defeat by Es with the other Keystones. However, if the player chooses to trust Hazama earlier in the game, then he will swoop in and claim the Keystone, plotting to cause all sorts of mayhem with it.

In Episode Persona, after System's defeat the Investigation Team returns to Yasogami High, only for it to be revealed to be another world created by System, with Ragna, Noel, Hyde and Ruby appearing as transfer students.

After System's defeat, the entire cast winds up trapped in the Under Night In-Birth universe during a Hollow Night. A restored System uses this as a chance to initiate a free-for-all battle royale, causing Linne to realize they need to repeat the whole thing over again.

After being defeated, System is sealed inside the RWBY Keystone. Team RWBY then returns to Beacon with the Keystone, planning to keep System as a pet.

In the true ending of the game called the "Cooperative Ending", System is defeated by Ragna, Yu, Hyde and Ruby, now powered by all 4 data collected Keystones. After the 4 heroes celebrate their victory with the rest of the cast, their universes are restored to their original states and they all returned back to their universes. 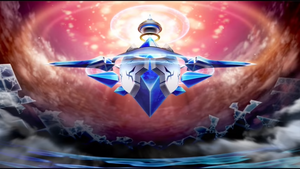 System with the BlazBlue Keystone. 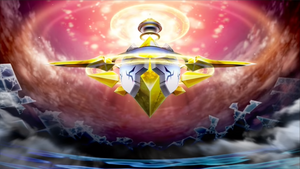 System with the Persona 4: Arena Keystone. 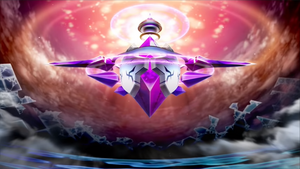 System with the Under Night In-Birth Keystone. 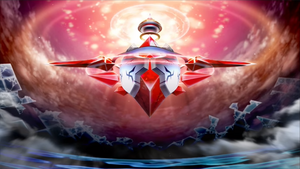 System with the RWBY Keystone. 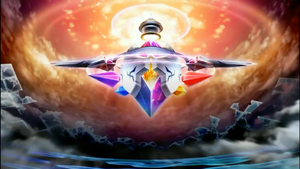 System with the power of all four Keystones.