Giant Robot
The T-1000000 is a major antagonist in the T2 3-D: Battle Across Time amusement ride.

A T-800 takes young John Connor through a portal into the year 2032. They arrive at a ravaged landscape where humans and machines are engaged in battle. They travel towards Skynet's headquarters while being chased by the T-1000 along with other machines. The duo reaches the headquarters and descend into it. They reach the core where Skynet is being protected by a very large Terminator known as the T-1000000. The T-800 blows up before it sends John through back into the present. The explosion destroys both Skynet and the T-1000000.

The T-1000000 resembles a gigantic spider with large claws. It is composed entirely of mimetic polyalloy which is similar to the T-1000's inner body. This material allows the T-1000000 to reshape parts of its body into weapons for slashing enemies.

The T-1000000 makes a brief cameo in the comic War Child. It battles with Skynet's forces against the Human Resistance. The T-1000000's fate is unknown. 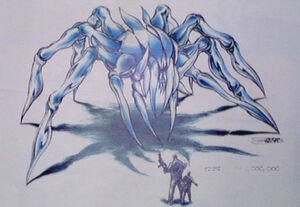 Concept Artwork
Add a photo to this gallery

Retrieved from "https://villains.fandom.com/wiki/T-1000000?oldid=4083150"
Community content is available under CC-BY-SA unless otherwise noted.