Killing people who get in the way of his efforts to hunt down and kill Sarah Connor and Kyle Reese.

Kill Sarah Connor, Kyle Reese and The Guardian in order to change the future.

Let the machines win the war (all failed).

The Genisys Timeline's T-1000 is a major antagonist in the 2015 sci-fi action film Terminator: Genisys. It is a mimetic polyalloy cyborg sent by Skynet to kill Sarah Connor and Kyle Reese and also Sarah's foster father, the T-800 Guardian. The assassin holds the ability to morph his form allowing him to form weapons out of his body and the ability to morph it's body is similar to previous models.

He was portrayed by Lee Byung-hun, who also played Park Chang-yi in The Good, The Bad and The Weird, Storm Shadow in the G.I. Joe film series, and the Front Man in Squid Game.

The T-1000 was a cyborg sent to 1973 by Skynet to change the course of the future and win the war by killing Sarah Connor as a child. He was only able to kill Sarah's parents due to the Guardian Terminator stopping him and rescued the young girl raising her. Upon its arrival, the T-1000 disguised himself as cop when he tried to lure Kyle Reese before Sarah came to rescue him.

After Kyle Reese arrived in a street in 1984, the T-1000 appeared and found Kyle, who was also being pursued by police officers, and chased after him. Kyle went into a clothing shop where he was hiding from the T-1000. When the officers captured Kyle Reese, the T-1000 hid inside a large mirror before attacking Kyle and killing one of the officers before Sarah Connor came to rescue Kyle Reese from the T-1000. Some of the T-1000's slime landed on the van and used it as a tracking device.

The T-1000 finds Kyle, Sarah and the T-800 in their hiding place of an abandoned warehouse where it dropped some of its metallic slime into the other terminator that was disabled by Sarah and the Guardian, reactivating it.

After another confrontation, the T-1000 later appears, disguised as Kyle Reese, to Sarah in a large room. When the real Kyle finds Sarah, it tried to confuse her stating that he was Kyle. Sarah guessed correctly and shot the T-1000's foot which reveals him. She shoots the ceiling from which acid spills and the Guardian T-800 holds the T-1000 in the acid rain with only the T-800's arm in the rain. The acid rain melts and destroys the T-1000.

The T-1000 transforming his arm into a spear. 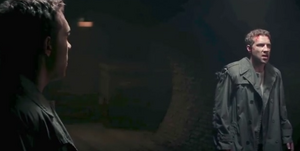