Founder and supreme commander of the Human Resistance armies (formerly)

Antagonizing and mocking Sarah and Kyle.

Gloating about himself.
Aiding Miles Dyson and Danny Dyson in enhancing Genisys/Skynet in the future.

The T-3000, formerly known as John Connor, is the central antagonist of the 2015 sci-fi action film Terminator: Genisys, the 5th installment of the series that set in its own timeline. He was sent by Skynet to kill Sarah Connor, Kyle Reese and the old version of T-800 to make sure Skynet will win in the war and will rule the Earth as he needs to make sure Genisys will operate well.

He was portrayed by Jason Clarke, who also played his former self, John Connor (the protagonist), in the same film, George Wilson in The Great Gatsby, and Emil Stenz in White House Down.

The T-3000 is a hybrid nano-technological cyborg terminator assigned to kill Kyle Reese and Sarah Connor, as well as complete failed missions assigned to other terminators. This version of the terminator is a nanotechnological man-machine hybrid and just like the T-1000, he is nearly indestructible and can survive any serious harm, albeit in a far more alarming rate.

Unlike previous Terminators created by Skynet, units of the T-3000 were humans who had been transformed through exposure to a type of machine phase matter. The phase matter would completely rewrite the victim's genetic coding, forcing their body to be transformed into resin on a cellular level. According to the heroic T-800 named "Pops", John Connor's infection and transformation was the only known successful attempt by Skynet to create a T-3000, as previous attempts done on some unfortunate human subjects resulted in them becoming insane and dying during experimentation.

As a result of his transformation, John Connor was driven insane and turned traitor.

In 2029, John Connor leads the resistance in the war against the machines. Skynet sends in a T-800 to kill John's mother, Sarah in order to prevent John's birth and thus effectively eliminating the resistance. John sends Kyle Reese to protect her but just at the moment when he is sent back, John is attacked by "Alex", a prototype of the T-5000 (a machine), who infects him with machine phase matter. Unlike the rest of the Terminators that they faced however, the T-5000 is actually the physical manifestation of Skynet itself whom previously uploaded itself into that unit.

In 2017, John in his adult self rescues Kyle and Sarah in a hospital and brings them to a parking lot. The Guardian aka. Pops (a Terminator that raised Sarah early on) notices something wrong with John, and upon seeing John has been assimilated by T-3000's machine phase matter, shot him twice to expose him. This infuriated Sarah and Kyle, both of whom briefly turned against him. The Guardian falters, realizing that he went too far.

Fortunately, he's actually indeed done the right thing albeit in a very rude way as all of sudden, John's blood turned into stand-alone particles that entered his body and it regenerates. John revealed that he has been named "T-3000". T-3000 gives Sarah and Kyle a chance to join the machines and end the war. They decline and a brief battle occurs between John/T-3000 and Pops. In the outcome, the T-3000 gets incapacitated temporarily.

The T-3000 tracks The Guardian, Kyle and Sarah to a warehouse near the Golden Gate Bridge in San Francisco, where they are attempting to destroy "Genisys", which is secretly Skynet. He is able to knock the school bus that the trio are in off the Golden Gate bridge, aiding the ignorant California Highway Patrol in capturing them. The T-3000 becomes the victor as the group are taken into police custody. Detective O'Brien later frees Kyle and Sarah, with the three hijacking a chopper. The T-3000 arrives in hot pursuit, but is delayed further as The Guardian divebombs into the helicopter blades, causing it to crash.

The T-3000 enters the Cyberdyne building, killing many inside. John also advances the countdown to Genisys by speeding up the process from hours to mere minutes. At that point, Genisys will spread to every software and be unstoppable. Sarah and Kyle plant bombs in the facility, but John destroys the detonator to the explosives.

The two Terminators engage in a brutal battle, during which John gains the upper hand due to his technology being significantly more advanced than Guardian. However, Guardian restrains the T-3000 and both become trapped in the field of the prototype time machine, with Guardian being knocked out and into a pool of prototype mimetic polyalloy, allowing it to bond with the liquid metal and survive.

The T-3000, on the other hand, is left to disintegrate as he perishes in the explosion of Cyberdyne Headquarters, which prevented Genisys from going online and gaining access to internet. However, in a mid-credits cutscene, Genisys is seen to be still online.

The T-3000 has trouble walking, due to the magnetic containment field. 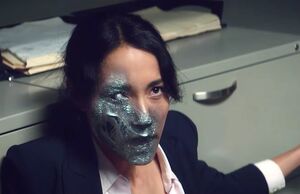 The T-3000 disguised as Detective Cheung has been blown by Guardian. 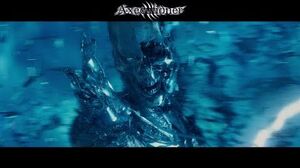