Maintain the existence of Skynet.

Futuristic Master Manipulator
The T-Infinity is an antagonist in the Terminator comic book series.

Skynet discovered that the timeline between humanity and the uprising of machines is unbalanced. It created a robot called T-Infinity. The new robot is intended to correct the unbalanced timeline.

In the year 2033, Skynet is infiltrated by the Human Resistance. The core is still intact. Skynet's main system notices the unbalanced timeline between past and present. The Resistance discovers the same problem during a simulation. Skynet develops a prototype of a robot known as the T-Infinity. Skynet then uses advanced technology to send the T-Infinity into the past. The robot is programmed to correct the balance.

The T-Infinity manages to survive the wreckage and hides someplace that is discrete. John, Uncle Bob, and the Human Resistance find an abandoned radio station. They use it to contact other humans. They send a signal which is intercepted by Marine sergeant Tara Holden. He is accompanied by a group of other soldiers. They meet John and the Human Resistance at the radio station. The combined forces penetrate a weapons factory. They are confronted by the T-Infinity upon entry. It manages to defeat Uncle Bob in a fight. After Uncle Bob is defeated, the T-Infinity leaves without fighting John. An alarm starts which draws the attentions of several robot tanks. John, Holden, and the other soldiers manage to escape in a hijacked machine. Meanwhile, Skynet still believes that other targets are responsible for the unbalanced timelines. The T-Infinity is recalled to 2033 and sent back into the past.

The T-Infinity arrives in 2015. Its current assignment is to kill Tara Connor. The T-Infinity attempts to raid the Resistance's headquarters, but it is temporarily disabled by an electromagnetic pulse. John Connor attempts to use a steel bar, but it causes the T-Infinity's on-board equipment to malfunction. As a result, the T-Infinity is sent further back in time. 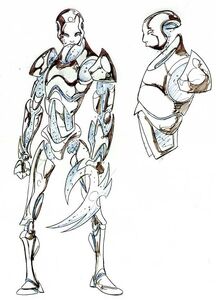 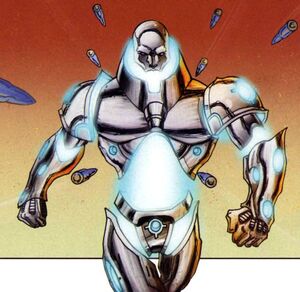 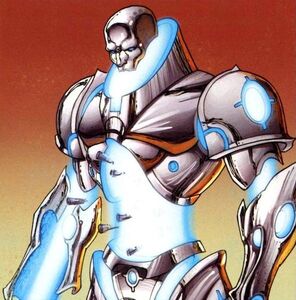 Absorbing bullets
Add a photo to this gallery

Retrieved from "https://villains.fandom.com/wiki/T-Infinity?oldid=4083149"
Community content is available under CC-BY-SA unless otherwise noted.