Destroying anything in his way during pursuing target.

Terminate everyone against Skynet (failed).

Robotic Assassin
T-RIP is the central antagonist of the 2009 sci-fi action film Terminator Salvation. It is the future counterpart and the prototype of the T-800 Series.

He was portrayed by Roland Kickinger (as a human with a CGI makeup of Arnold Schwarzenegger's face) and later by Buster Reeves (in his endoskeleton form).

As the Resistance prepares for a massive invasion of Skynet forces to culminate in the destruction of Skynet Central, Skynet deploys a series of machines to capture two humans above all others: Kyle Resse and John Connor, while searching thought the prison cells of the Skynet Facility.

Connor finds one cell still occupied, but then Connor gets knocked back, when the machine inside bursts out, revealing itself to be a prototype T-800 Infiltrator. He shoots it multiple times on the chest but to no avail as the machine grabs him by the neck threw him on the side of the room. He smashes the butt of his gun at the T-RIP's face, with little effect and the machine responds by throwing him across the room.

John manages to retreat to the laboratory, where he encounters a disoriented T-600, firing aimlessly after Kyle stabs it in the neck. T-RIP follows him and rips the T-600 in half in the process. John then blasts it twice with a grenade launcher, causing its flesh coating to burn off, exposing its endoskeleton. John blows up a hole and escapes alongside Kyle Reese and Star through the Terminator factory under the laboratory.

T-RIP continues to stalk them for some time, while hiding amongst the T-700 within the factory. After having a false alarm on the elevator, it ambushes John and Kyle from behind. Kyle shoots it with a grenade launcher, temporarily disabling it, as he and Star escape on the elevator, with John stays behind to buy him some time. However, the T-RIP attacks hims once again, this time disarming him and smashing him on the floor.

John tries to escape and confronts the machine upon a catwalk with a shotgun, but is unable to stop it and is subsequently thrown down to the lower level where it grabs him by the throat and almost kills him. John is saved by the timely arrival of Marcus, who charges the T-RIP and pins it down, allowing John to escape. The T-RIP ignores Marcus at first and tries to reacquire John, but Marcus's persistence hinders its progress as he struggles to hold it back.

The T-RIP fights him back and slams Marcus against some machinery before hurling him into a metal drum, resulting in the skin on his left hand being melted off. Enraged, Marcus charged the T-RIP as it approached Connor's position. He shoved the machine into a pilon and proceeded to beat it with a piece of railing. The T-RIP grabs his wrist, however, and pushes him away. It then picked up a cinder block and slammed Marcus repeatedly until the block shattered, after which it scanned Marcus' body, discovering his beating heart and identifying it as a point of vulnerability.

The T-RIP delivered a crushing blow to Marcus' chest, the sheer force of which effectively stopped his heart and terminated him temporary. It then tracked John to his last known location, but found him missing upon arrival. The T-RIP then mimicked Kyle's voice to lure the Resistance leader into its trap. Connor cautiously followed the voice, only to find the T-RIP waiting for him. He fired several times with his pistol, but the machine was not daunted in the slightest.

John spotted his grenade launcher on the lower level beside Marcus' body and so he jumped down, landing hard with the T-RIP right behind him. John managed to grab the launcher and fired at the vat of metal above the machine, causing it to spill over it. The T-RIP was momentarily consumed by the metal, but rose out of the mass and continued its advance, so Connor fired his last remaining pistol bullet at a coolant pump nearby, freezing the metal on the machine's body and effectively freezing it for awhile.

Before it froze completely, however, the T-RIP dug its fingers into John's face, creating the legendary scar on his left side. Connor then retreated to Marcus' side and tried to revive him via defibrillation, while the T-RIP was slowly breaking free from the metal coating. After John succeeded in defibrilling Marcus with a power cable, the T-RIP broke completely free and impaled Connor through the chest with the same piece of railing Marcus had used earlier to fight it.

Marcus, enraged, avenges John by grabbing the railing stabbing it in the neck and decapitating it, as both men ran off to safety afterwards. Its chip was later destroyed alongside the facility when the Resistance blew up Skynet Central. 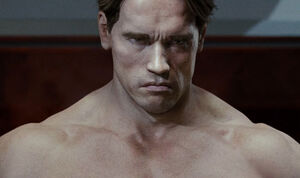 The T-RIP fresh from the assembly line. 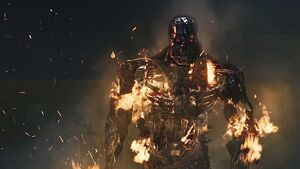 The T-RIP losing its flesh coating. 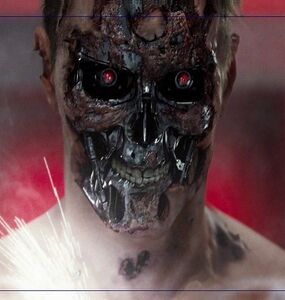 An alternate scene, featuring T-RIP's face getting blown off.