Reclaim his garden gnome by any means necessary (failed).

T-Rick is the main antagonist of the 2012 American comedy film Project X.

A former soldier, T-Rick later becomes a martial arts instructior and lives in a dilapidated house in the working-class to lower-class suburbs of Pasadena. To keep a living, he also acts as a secret drug dealer.

Prior to a spring break, a high school student named Thomas Kub is planning to celebrate his birthday, which falls on a weekend. After his parents leave, one of his two friends, Costa continues with the plan to hold a huge party in the Kub house despite Thomas' reluctance. They are then joined by another friend named JB to help them with the said plan

After the trio buy party supplies when classes are dismissed, they pay a visit to T-Rick in his home in order to buy marijuana. As they wait for T-Rick to get their purchase, Costa takes his Garden Gnome to use as a mascot. Upon discovering this, T-Rick attempts to chase him down to reclaim his gnome, but they manage to escape in Thomas' van.

After seeing the party on the news after it goes out of control, T-Rick arrives at the party with a flamethrower and starts to burn down the neighborhood until he finds Costa. Costa tells him the gnome was destroyed after being filled by Ecstasy, enraging T-Rick causing him to attempt to attack Costa and the party-goers.

In the epilogue, T-Rick is shown to have survived the explosion and is under police custody. It is implied that he will stand trial for arson. 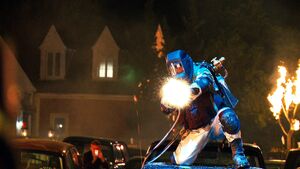 T-Rick on rampage.
Community content is available under CC-BY-SA unless otherwise noted.
Advertisement