Terminator 3: Rise of the Machines

Killing her victims/targets and other random people.

The T-X, also known as the Terminatrix, is the titular main antagonist of Terminator 3: Rise of the Machines, the third installment of the Terminator franchise and the first to be within The Rise of the Machines and Salvation Timeline instead of the Mainstream Timeline. She is a powerful gynoid sent by Skynet to hunt down and eliminate Human Resistance leader John Connor and all his would-be future allies, including Katherine Brewster.

She was portrayed by Kristanna Loken.

In 2032, the T-X was battle-tested by Skynet against several other Terminators and by Skynet itself. The T-1002 engaged the Terminatrix in hand to hand combat in the Skynet Central Core, using its mimetic polyalloy components to develop stabbing weapons all across its body. The T-X was able to gain the advantage through a combination attack utilizing her internal buzz saw to remove the spikes and later destroyed T-1002 with a direct impact from her plasma cannon.

The Terminatrix arrived on July 24, 2004, in a clothes shop with mannequins, melting them and a glass frame on arrival. Assuming the form of a naked woman, it walked out of the shop and approached a confused lady, admiring her car before killing her and taking her belongings, including a red leather jacket, red leather pants and black leather boots. The Terminatrix then went on to killing any of John Connor's future lieutenants, including Kate Brewster and her father Robert Brewster. However, when she coincidentally found Connor, who had been formerly untraceable due to "living off the grid", and she made him her priority target.

At the Cyber Research Systems facility, the Terminatrix injected nanobots into the T-1s to have them protect Skynet the moment it got control of the entire U.S. defense grid. It then killed Robert before going after John and Kate. They managed to trap her in a particle accelerator before going to Crystal Peak, where they were told Skynet's central core was supposedly located.

The Terminatrix broke free of the accelerator and followed them, losing most of its polyalloy skin and half its lower body in the process. She grabbed John, determined to complete her mission but a T-850 unit sent by Kate from the future destroyed them both with its remaining hydrogen fuel cell with a remark of "You are terminated!" also avenging the deaths of the humans she had killed. Despite the T-X's destruction, she has succeeded into helping Skynet become sentient to declare war on mankind, thus Judgement Day has finally occurred. 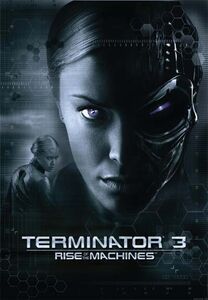 The T-X on a poster for Terminator 3: Rise of the Machines. 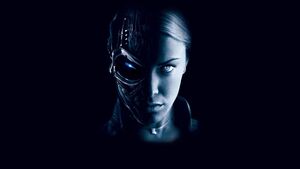 The T-X licking a tissue that has John Connor's blood on it. 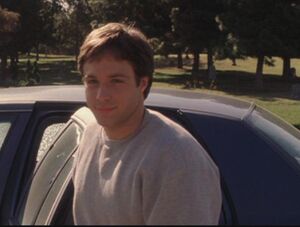 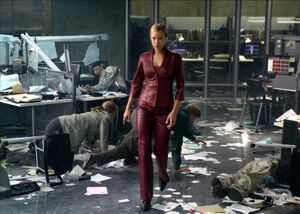 T-X walking through the office. 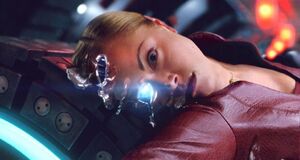 T-X gets caught by the magnetic field also losing her human form. 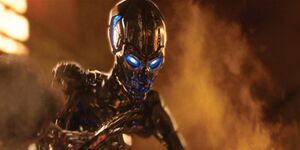 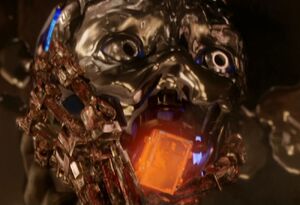 The T-X meets her demise by getting a Hydrogen fuel cell stuck in her mouth from The T-850 before it explodes. 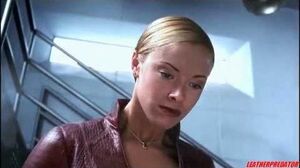