T-elos is a major antagonist in the Xenosaga series. The archenemy and rival of KOS-MOS, she is an cyborg meant to replace her. Like her rival, she holds part of Mary Magdalene, with her piece being her body as opposed to KOS-MOS having her soul.

In Japanese, she has been voiced by Mariko Suzuki in all current appearances. In English, she was voiced by Bridget Hoffman in Xenosaga Episode III: Also Sprach Zarathustra and Caitlin Thorburn in Xenoblade Chronicles 2.

Born from the T-elos project, T-elos' form was made to house the body of the revived Mary, with most of her form being of human origin. To complete the revival of Mary, T-elos desires to kill KOS-MOS to unite the two halves.

In the course of the events of the Xenosaga series, it is revealed that KOS-MOS was a step in the development of T-elos intended to serve as the vessel for the resurrection of Mary Magdelene "the partner of the Messiah". T-elos herself was created from the bodily remains of Mary, and thus may be considered more of a cyborg than an automaton. In order to complete the process for the resurrection, T-elos intended to destroy KOS-MOS which had become the vessel for Mary's spirit.

In their first engagement, T-elos demonstrates that she is clearly more powerful than KOS-MOS. In the ensuing fight, KOS-MOS states that T-elos output is 4.75 times her own. In the ensuing fight, KOS-MOS only manages to connect with a single attack against T-elos. Meanwhile, T-elos lands a number of staggering blows against KOS-MOS. It is clear from the start of the fight that T-elos clearly outclasses KOS-MOS. While KOS-MOS is able to outlast her own estimate against T-elos, she is defeated when struck by T-elos' Phase Transfer Cannon. T-elos then uses her heel to crush KOS-MOS' chest, disabling her. The damage inflicted in the fight was such that KOS-MOS had to be completely rebuilt in order to function again.

In their second encounter, T-elos squares off with a rebuilt KOS-MOS. T-elos proves able to easily overwhelm the other party members, but is eventually defeated by KOS-MOS following an exchange of Ether, via Phase Transfer Cannons. As T-elos lay defeated, she is embraced by KOS-MOS as the two resonate with one another. T-elos disseminates becoming one with KOS-MOS, thus allowing Mary to finally be resurrected in both body and spirit.

T-Elos makes an appearance in the Project X-Zone series. In both entries, she appears as a boss that is able to be fought, and in the first game, she is also able to be recruited as a playable character.

"The latest model battle android developed under the anti-Gnosis Project Zohar. "Telos" means "ultimate state" or "unlimited power" in ancient Greek, a fitting name since she once displayed power far above that of KOS-MOS in a previous battle between them. Also, unlike KOS-MOS, she is capable of displaying emotions. She is high-handed and has a cruel side that simply enjoys causing destruction. Fixated on obtaining something that KOS-MOS possesses, she attacks her relentlessly, once even almost totally destroying her. Just as with KOS-MOS, T-elos's body conceals a secret."

T-elos appears in Xenoblade Chronicles 2 as a recruitable Rare Blade. She has the Attacker role, harnesses the Dark element, and wields a Greataxe. She can be awakened from a Core Crystal after installing Patch 1.4.0 and clearing the main story.

A few known features are that she is the diametric opposite of KOS-MOS, wearing a black suit with red and dark purple highlights to contrast KOS-MOS's white, blue, and gray uniforms. She also has dark skin, aquamarine eyes, and silver hair and seems to possess a sapient personality, unlike KOS-MOS' robotic personality. Astute observers will also notice that T-elos is left-handed whereas KOS-MOS is right-handed. This may be a hint to her nature as the ancient Latin words for right and left are "dexter" and "sinister". (One could also possibly consider T-elos ambidextrous as while she fights primarily with the blade on her left forearm, she draws and fires her pistol with her right hand.)

In battle, T-elos has many powerful mechanical weaponry she is able to use to fight her foes. This powerful set of weapons includes a sword, a large Phase Transfer Cannon in her chest to fire powerful lasers, and various firearms (Such as the Magdalene-16 pistol and a gatling-gun. Even without weapons, T-elos is still a dangerous foe to fight against, with powerful physical strikes that can send foes flying and great reflexes to easily dodge, block, and counter even attacks delivered from great weaponry. 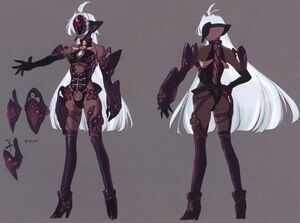 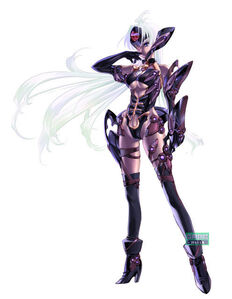 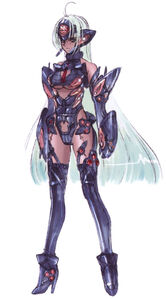 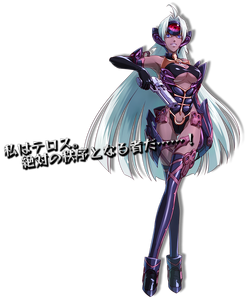 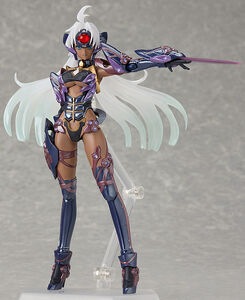 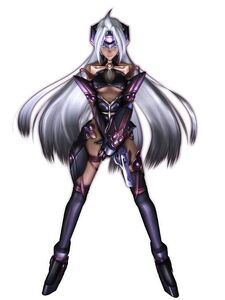 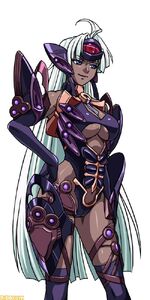