T.O. Morrow is a supervillain from DC comics and a criminal mastermind and a scientific genius.He is the archenemy of Red Tornado. Using his technological prowess and his immense inventing abilities, T.O. Morrow created a special "television set" that would allow him to see into the future. With this invention he would examine many futuristic instruments and then replicate them for use in his present time.

The majority of his inventions were used to commit various types of crimes. Eventually becoming bored with how easy it was to commit crime, he began challenging superheroes like the Flash and Green Lantern.

Shortly after T.O. Morrow created the Red Tornado to infiltrate the Justice Society of America so that Morrow would be able to rob the 20th Century Museum. However his creation outgrew its programming and rebelled against its creator, foiling his crime.

In the show Young Justice Morrow appears in the episode "Welcome to Happy Harbor". He is working  Bromwell Stikk to create the Mister Twister armor in order to capture and reprogram Red Tornado the android he created to destroy the Justice League but turned on him. However they failed. It is also known that he is in league with The Light. In the episode "Humanity" he builds another android called Red Volcano however he turns on Morrow. When he kills him it is revealed that it was really a Morrow-bot. In the episode "Insecurity" it is revealed that he has been in a coma since the 1950s and is in the medical suit in Belle Reve prison. In this show he is voiced by Jeff Bennet.

He appears in Oolong Island where he was betrayed by the Secret Society of Super Villains. The player has to defeat Egg Fu and his hacked robots to save Morrow's work. It is later revealed that he has been helping Joker with his new venom but betrays him. The player has to break into his work shop with Joker and defeat  his androids and get past his traps to get the venom back. He also captures Red Tornado and is able to control him to fight the player. When the player gets to his lab they find that Joker, Harley Quinn, Batman, and Robin however he keeps them at bay by using the venom and escapes. He later steals some of Joker's venom and uses it to take over Ace Chemicals in order to perfect his Chemo research. 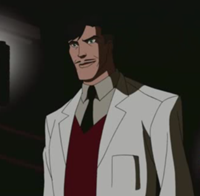 T.O. Morrow in the Television History

T.O. Morrow in DC Universe Online.
Add a photo to this gallery

Retrieved from "https://villains.fandom.com/wiki/T.O._Morrow?oldid=3246541"
Community content is available under CC-BY-SA unless otherwise noted.