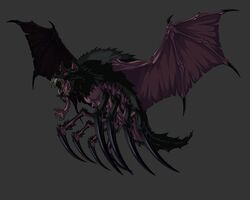 THAT is a shape-shifting monster said to be as old as time itself, who kidnaps children by disguising himself to fool them and manipulating them into following him to his lairs, where he then imprisons them to drain their life force before going to sleep to await the next time of year he can do it again. Much of his past is shrouded in mystery; some theorists suggest that he may have once been a regular frost giant before being turned evil by unknown circumstances, while others say he's an ancient being who has existed since the birth of Lore. During the Frostval events, it is mentioned that he can shapeshift into a puppy dog looking for a friend, a magical snowman that can grant wishes, and a Frostval elf luring children with "promises of taking them to a toy factory". His true form is revealed during the Mogloween events, where he takes the form of an eldritch monster resembling a cross between a bat and a spider with a tongue that has a mouth on itself. The Blacklights found in his insides seem to be the main power source for THAT, as the heroes and Chilly destroying them is what forces him to regurgitate them.

First appearing in the 2017 Frostval event, THAT, under the name of Jingles, first appears in elf form before Chilly, luring him and making him think that deep underground is a magic toy factory. Later, the heroes bait Jalnar, in his snowman form, so they can rescue the children from his lair. Realizing that this was the heroes' and Blizzy's plan following Ice Master Yeti having told them and the other villagers about him, he summons the Arctusk to attack the heroes only for it to be defeated by them, much to his frustration. The heroes and Blizzy finally make it to Jalnar's lair, where they challenge him to battle. Losing the first phase of the battle to them in his elf form, Jalnar assumes the form of a frost giant to fight them once more. Unfortunately for him, this is not enough, and the heroes and Blizzy defeat him once again, and he moans in disbelief before exploding, which sets the children free from the ice that he froze them in.

During the 2019 Mogloween events, Jalnar revives and resurfaces, starting to kidnap children again and even kidnapping Bubble of the Cauldron Sisters. Chilly, having at first thought his mind was playing tricks on him, realizes that Jalnar has returned, but makes plans with the heroes to perform a Yeti ritual and use a spell to get rid of him once and for all. After finishing the spell preparations and rescuing Bubble, Chilly throws the jar containing the spell at Jalnar much to the latter's frustration, but this does not kill him - instead, it enrages him into being forced to transform into his true form. With his true form revealed, THAT transports the heroes and Chilly to his void with him and proceeds to eat them. But this is not enough to stop them, and they destroy the Blacklights, within his womb, severely weakening him and leaving them free to finish him off, destroying him much to his shock. With THAT destroyed, the children he kidnapped are free and Bubble is happily reunited with Toil and Trouble. Despite Chilly declaring THAT gone for good, Bubble voices her belief that there will be something horrible next Mogloween, and suggests to her sisters that they conjure a hybrid of a Werepyre and a lovecraftian horror, which upsets him.

THAT disguised as Jingles the Frostval elf. 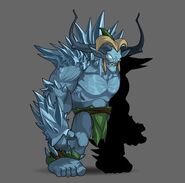 Jalnar as a frost giant.