Find the treasure of Monkey City.

Tabaqui is a supporting antagonist in the 1994 film Rudyard Kipling's The Jungle Book. He is based off of a character from Kipling's novel, a jackal with the same name.

He was portrayed by Anirudh Agarwal.

Tabaqui is very wicked, cunning and cold-hearted. He is also rather reserved, preferring to keep his thoughts to himself and although initially composed, he later shows himself to be a truly murderous and barbaric man.

Tabaqui is a jungle guide who is friends with Buldeo, who serves as the right-hand man to William Boone. When William discovers a jeweled dagger that Mowgli is in possession of, Buldeo and Tabaqui plot with William and his friend Lieutenant Wilkins to convince Mowgli into taking them to Monkey City where there is more treasure. When Mowgli refuses, they decide to kidnap him instead.

The attempt to capture Mowgli fails as well so they kidnap William's ex-girlfriend and Mowgli's love interest Kitty Brydon, along with her father Colonel Brydon, and threaten their lives unless Mowgli cooperates. Mowgli agrees to take them to the city, as long as they survive the dangerous jungle; even Tabaqui warns of the threat of the tiger Shere Khan protecting the jungle from hunters.

The next morning, Sergeant Harley, one of William's men, sinks in quicksand when attempting to catch Mowgli. Taking Kitty hostage, Tabaqui and the others mourned for Harley, but is disgusted to learn that Boone is unconcerned by this. Boone then orders his men to move on forward, leaving Colonel Brydon to die (though the latter was rescued by Mowgli). Later that day, Tabaqui aggressively confronts Mowgli atop some cliffs and tries to throw him off the edge. Mowgli fights back, only to be pummeled and overpowered. Tabaqui nearly crushes Mowgli with a small boulder, but Mowgli recovers quickly and kicks him in the groin, knocking Tabaqui off his balance and causing him to topple off the cliff to his death on the rocks below.

Tabaqui's death was witnessed by Kitty, Boone, Buldeo, and Wilkins, but as Wilkins and Buldeo are horrified by the loss of Tabaqui, Boone doesn't care for Tabaqui's death as he orders both Buldeo and Wilkins to kill Mowgli, who manages to escape by jumping into the water.

Tabaqui and the others mourning for Harley

Tabaqui screams as he falls to his death 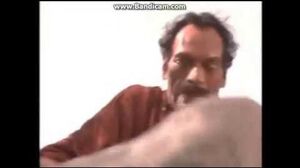