Although Tabuu does not appear until late in the story mode, Tabuu's unseen presence is apparent while he is controlling Master Hand behind the scenes. After Ganondorf betrays and turns Bowser into a trophy, he discovers that Master Hand is being controlled by Tabuu, enraged that he has been manipulated by him the entire time, Ganondorf leaps up to attack Tabuu but Tabuu easily defeats him and turns Ganondorf into a trophy and easily defeats Master Hand when he tries to attack him as well.

Once Mario, Link, Kirby, Pit, Yoshi, Peach, Zelda, the Ice Climbers, Lucas, Captain Falcon, Captain Olimar, Donkey Kong, Diddy Kong, Samus, Fox, Falco, Meta Knight, Lucario, Mr. Game & Watch, Pikachu, Pokémon Trainer, Ike, Marth, R.O.B., and Snake all confront him, he turns every one of them into trophies easily, seemingly leaving no one to stand against him. However, King Dedede's medallions turn Kirby, Ness, and Luigi back to normal, and they turn him back in return (since he was turned into a trophy by Bowser). They track down everyone else in Subspace and restore them. Bowser, Ganondorf, and Wario join their team and eventually they reach Tabuu again. He is about to use his wings to turn them into trophies again when suddenly Sonic appears and destroys Tabuu's wings in four seconds flat. He joins their team, and together they fight against Tabuu. Finally, after much effort, Tabuu is finally defeated, and upon his defeat, he shrieks and disintegrates as light energy erupts from him and the Subspace fades into nonexistence.

Tabuu returns in the "World of Light" adventure mode in Super Smash Bros. Ultimate as a legendary class neutral type primary spirit (the most powerful spirit type), having presumably been destroyed by Galeem and stolen by Dharkon, forced into doing the latter's bidding, implying they are both more powerful than even he is. He is one of the spirits the fighters must defeat in order to advance through the rest of the game. Tabuu is found in the Mysterious Dimension possessing a giant metal puppet fighter of Bayonetta and must have his stamina depleted in order to obtain him. Periodically, the player's stamina will drop suddenly as a reference to Tabuu's off-waves. After defeating and obtaining him, Tabuu may be used as a spirit ally to the fighters. He is capable of equipping three support spirits to boost his power as well as that of the fighters wielding him. Once he is obtained, the fighters will engage in a boss fight against Marx. 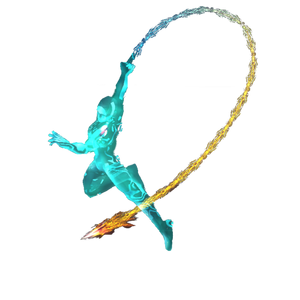 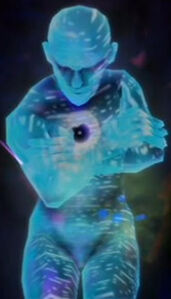 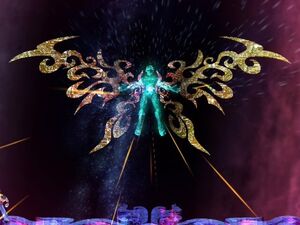 Tabuu with his wings spread, unleashing the Off-waves. 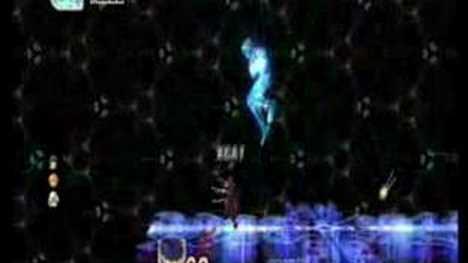