Be a successful serial killer.

Run away to japan.

He is a serial killer who works as the president of Sungwoon Express during the day and has a hobby of killing people using kettlebells at night. He is the culprit in the murder case of Jin Hyuk Mu's wife. He is also the son of Gi Bum Mo, the chairman of Sungwoon Express.

He was portrayed by Jaewook Kim.

Tae Gu Mo is cold-blooded psychopathic, misanthropic and murderous sadistic person. He was born with a psychopathic brain from an early age, and shows an unhealthy psychopathic course of cruelty and killing animals. And he seems to worship Social Darwinism.

In addition, Tae Gu Mo hallucinates because of events in the past, and he sees the hallucinations and becomes anxious. He shows the joy of killing people and only thinks of killing as a game, which shows how terrifying a psychopath that even his father Gi Bum Mo is, fears him. And he is cruel to his own father.

Also, Tae Gu Mo is very intelligent and cunning, so most murders go unnoticed and he usually acts as the president of Sungwoon Express and shows a good image.

He was born with a psychopathic brain, but after seeing his father Gi Bum Mo's criminal activities in the basement of a villa, he became the serial killer he is today because of Gi Bum Mo's words, "You are special." . And when he was 12, his mother suffered from depression and committed suicide. The fact that the basement of the villa was used as a crime scene is also related to this past.

He is the true culprit of the “murder case of the wife of detective Eun Hyung-dong,” which brutally murdered Jin-hyeok Mu’s wife and Kwon-joo Kang’s father, an unidentified assassin who left no traces other than the fact that he had an occlusal malocclusion that made a crackling sound when speaking.

He uses a kettlebell as a weapon and considers himself an executioner. For example, he decides to go to prison on his behalf, and then kills Ko Dong-cheol, who was the strongest suspect in the Eun Hyeong-dong case, and then gets a piece of glass stuck in his foot, or rips off the mouth of Shim Chun-ok, who confessed to the police so that Nam Sang-tae's tail is caught and then kills They are plucking out the eyes of Jang Gyu-ah, who informed the police that they saw a male state in Fantasia, and killing them, or punishing and killing organs related to escape and feet, confessions and mouths, sightings and eyes.

He sees Jin hyeok and Kwon ju coming to the villa through CCTV and cuts off communication as if teasing them and lure them into the basement. After confronting Jin-hyuk and having a gunfight, communication resumes and he is arrested by the police, but he is taken to the hospital where his father used his hands and escapes under the guise of suicide by poisoning. He tries to leave by boat with a forged passport, but the police know first and arrest the broker at the port. And while on the run, he sees Kwon ju's interview and tries to kill him, but Kwon-ju consults with Jin-hyeok in advance and deliberately entices Mo Tae-goo through an interview. In the meantime, he provokes Jin hyeok and tells him to kill him, but Jin-hyeok does not kill and Tae Gu Mo is arrested.

After that, he appears in the form of being admitted to a psychiatric hospital. After the treatment, a psychiatric hospital doctor instructs a male nurse to change his clothes, wash him, and administer medicine, but the nurse leaves Tae Gu Mo in a wheelchair in a solitary room. As creepy screams and laughter echoed around Tae Gu Mo, who was left alone, mental hospital patients surrounded him with various weapons. A mental hospital doctor who gave orders to a male nurse suddenly appeared in front of Tae Gu Mo, who could not fully understand the situation. Shortly thereafter, Mo Tae-goo was shot all over his body with various weapons by mental hospital patients, and while he was lying in blood, he was finally hit by a doctor with a meat-mincing hammer in the face and died. 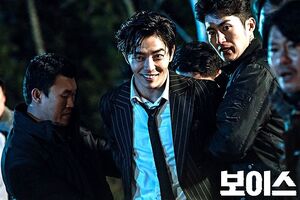 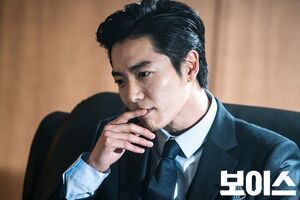 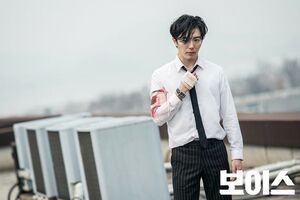 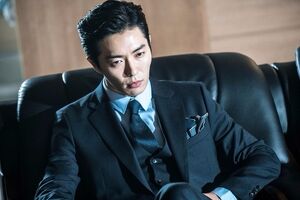 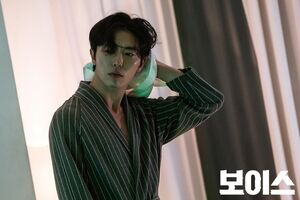