Steal all gold in Skylands (failed).

Tae Kwon Crow, also known as the Great Hawkmongous, is one of the trappable villains in Skylanders: Trap Team. He is of the Dark element.

He is voiced by Matthew Mercer.

At first encounter, Tae Kwon Crow appears to be a friendly bird and would even play a game of Skystones Smash with his opponents.

However, in reality, he is an evil and cruel Sky Pirate who will not hesitate to destroy anyone in his path. He was also somewhat egotistical and loud-mouthed as he describes himself as "The Great Hawkmongous".

He also cannot comprehend when someone was better at something than he was.

Tae Kwon Crow appears as the leading villain of the fifteenth level, Skyhighlands. He encounters the Skylanders twice, though with no knowledge of who they are, and challenges them to Skystones Smash. On the third encounter, however, he sends the air pirates to attack the Skylanders, and then fights them himself, stating that he will not allow the Skylanders to use the air pirate's prism to help them find the Golden Queen. 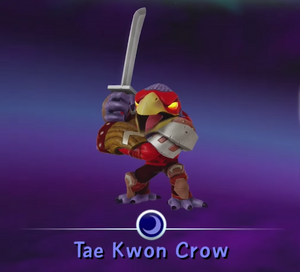 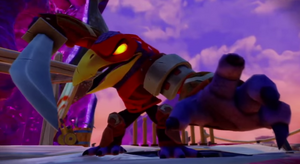 Retrieved from "https://villains.fandom.com/wiki/Tae_Kwon_Crow?oldid=3964252"
Community content is available under CC-BY-SA unless otherwise noted.