One of Sorbet's Elites

Tagoma (in Japanese: タゴマ; Tagoma) is an elite soldier in Frieza's army and the accomplice of Sorbet and an antagonist in the Dragon Ball Z movie Resurrection F and the anime series Dragon Ball Super playing a bigger role in the latter.

He is voiced by Kazuya Nakai in the Japanese version, and by Micah Solusod and Tom Bauer in the English version.

In the past Tagoma was able to see Frieza talking with Dodoria and Captain Ginyu, Tagoma mentioned this event before enacting the plan the resurrect Frieza.

Years after Frieza's death, he became one of the leaders of the Galactic Frieza Army and agreed to help Sorbet in the operation to revive Frieza, so he would have reorganized the empire.

He went along with Sorbet in the planet Earth in search of the seven Dragon Balls, he was later surprised to see Emperor Pilaf's Pilaf Gang with six one of them, he threatened them to give him all of them.

With six Dragon Balls in his possession he quickly went to the ocean and retrieve the last of them, he later summoned Shenron and revived Frieza but he was reduced in pieces, he asked Sorbet to put him in a recovery chamber, which completely restored the alien tyrant.

In the movie, after suggesting to his master to simply let go of his grudge against the Saiyans and instead focus on running his family business. This proved to be a fatal mistake. Enraged, the cosmic tyrant instead killed Tagoma (and several of his other soldiers in the process) with his Psycho Death Bomb technique, sending Tagoma flying into the abyss of space while screaming for Sorbet to help him.

Happy with Frieza return, he asked him to think on the universe and ignore the Super Saiyans, his request enraged Frieza which pierced him in the limbs with his death beams and immediately trained with him for four months (likely choosing this as a way of torturing Tagoma for his suggestion) instead of killing him like in the movie. During this time, he possibly also made sure that Tagoma became mentally broken to the point of becoming as bad as he was.

After the training he returned to Earth and fired a Ki Blast to kill Shisami and injure Gohan, he then fought against Piccolo and easily ripped off his arm and defeated him along with his companions.

Laughing as seeing how weak is opponents are, he is cought off-guard by Gotenks which heavily damaged him, he quickly recovered from the attack and saw a frog writing the word change on the ground, when he said that name his body swapped with that of the namekian frog, resulting in Ginyu taking his body. Tagoma's true fate afterwards is something of a mystery. But he was most likely killed when Frieza destroyed earth (although Whis' ability to turn back time to undo Frieza's attempt, still return his true fate back to being a mystery).

Tagoma is seen as a loyal member of Frieza's army. He is patient, analyzes the situation at hand, and has a higher power level than most of his subordinates. Although loyal to Frieza's army, he is shown being hesitant about Frieza, as he states to Sorbet that he does not understand why they need to revive Frieza in order to rebuild the empire showing that like the rest of the Army, he only serves the tyrant out of fear. He is also a realist, as he tries to convince Frieza that the Saiyans are too powerful, and that he should just focus on rebuilding his empire, which causes his death in the film, and torture in the anime.

In Dragon Ball Super, after training with Frieza, Tagoma starts to take on some of the traits of the tyrant, sadistic and less merciful. His normal facial expression changes from a dull serious look, to a dark evil look - laughing maliciously when about to face the Z Fighters. His uncaring nature is shown when Tagoma kills Shisami in an attempt to kill Gohan, and also when he intimidates Sorbet when the latter shouts at him - whereas he had previously held Sorbet in high regard. Tagoma also starts to become arrogant and proud of his power, as he considers himself the perfect warrior to serve Frieza. One should note that this is the result of being tortured making him more sympathetic despite shedding most of his redeeming traits. 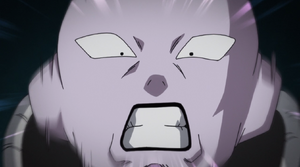 Tagoma getting blasted into space by Frieza.