Find and make deals with the unhappy

Devour the despair, misery, bodies and souls of those who make deals with him

Tahm Kench, also known as Two-Coats and most commonly as The River King is a villanous playable character on the multiplayer online battle arena game League of Legends.

An ancient demon as old as the world exists, Tahm travels through the rivers and waterways of entire Valoran to find those who are unhappy with their lives and fulfill their greedy desires in exchange of little things. However, everyone who makes deals with him end up lost in his maw, in one way or another.

The 126th champion added to the game, Tahm Kench was released on July 9th, 2015, and is most commonly played in the support role.

He is voiced by Pat Duke, who also voiced Lord Rhyolith from World of Warcraft: Cataclysm.

Tahm's past is an enigma. He is a shapeless, nameless unknown ancient demon that travels through the rivers in all of Runeterra finding the miserable and those who are unhappy with their lives, the poor, or the greedy who always want more.

Tahm Kench goes by many names, but always presents himself as a fancy, charming, and charismatic figure (despite his disturbing choice of appearance) that offers them a solution to their problems. Tahm will give them whatever they want, but in exchange they have to give him little things of their bodies or lives, or as he puts it, "let him in". The thing is that Tahm asks for such insignificant things and gives so much, that the person doesn't realize when he starts asking for bigger and more important things, and so will never stop to give to Tahm until they have nothing left. Once the person has nothing to offer, the deal ends, usually in their deads or fall into disgrace and despair.

More often than not, Tahm's deals end with him swallowing them alive, feasting in their flesh and collecting their souls, but there are other rare occasions were Tahm actually gives them a second chance to start again with the deal and squeeze them more. This is proof that Tahm's favorite food is not the body of their victims, but their sole despair and misery.

Tahm's story has resonated in Runeterra as a legend to scare those whose greed end up destroying their lives. The fear of encountering this beast at a man's very lowest has prevent humankind to fulfill their darkest desires and auto-destructive tendencies, as no matter how exquisite the bargain is, at the end it is always the same, in his mouth you will be lost.

In game, Tahm Kench serves as a warden-type character, tanking enemy damage to protect his allies. Tahm's passive, An Acquired Taste, lets him build stacks as he damages enemy champions to use Devour, which lets him eat them and later spit them in a direction of his choice. Tahm can also use Tongue Lash to damage and slow enemies, and Thick Skin allows him to tank enemy damage over time in the form of gray health. Tahm's ultimate, Abyssal Voyage, teleports him across the map, and he may eat an ally champion to bring them with him.

Tahm is a charming, charismatic, educated, sophisticated and eloquent figure who has no problem to convince people to believe in him despite looking like a complete monster. His dialect is so fancy and his words are so sincere that makes him look like an actual affably being. Unfortunately, Tahm is actually a cunning, sadistic and hypocritical figure that uses the oration to lure his victims into his deals. A pathological liar, Tahm always has the best words for every being that falls into his bargains, and takes out the worst from those who are his enemies. Egocentric and cruel, Tahm believes that the whole world is his river, and that he is the king of it, an analogy that he owns the entire world. He is shown to actually be quite possessive with other evil monsters or demonic beings that confronts him, such as the Baron Nashor (a Void serpentine monster) being in the river. He tends to make believe his victims that they can be more than partners, but also friends. But as soon as the deal ends, Tahm shows his true colors, a sadistic being who rejoices in the pure pain and misery.

Tahm Kench as he appears in Legends of Runeterra. 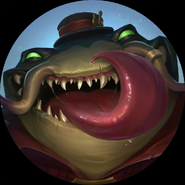 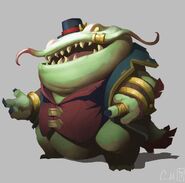 Tahm Kench tells the tale of the handsome gambler.

Tahm Kench underwater.
Add a photo to this gallery

Retrieved from "https://villains.fandom.com/wiki/Tahm_Kench?oldid=4096743"
Community content is available under CC-BY-SA unless otherwise noted.