The Tailed-People Clan Jashinka Empire are an imperialist society of reptilian humanoids and the main antagonists of Kagaku Sentai Dynaman.

Believing themselves to be superior life forms, the Jashinka have a hierarchy based on the numbers of tails each of them has, with a higher number of tails designating a greater status.

They originate from a meteor that crashed into Earth and burrowed into its core, where the lifeforms within it evolved into a civilization known as the Tailed-People. The Tailed-People became advanced in science and, believing the Earth to belong to them, launched an invasion of the surface world. They initially sought to forcibly convert all of humanity into Tailed-People like themselves, but after repeated failures they decided to simply wipe out all of humankind.

The Grand Gizmo is the airship headquarters of the Jashinka Empire, home to Emperor Aton and his inner circle. It typically resides underground, but occasionally enters the surface through a tunnel in a volcano to battle the Dynamen in their Dyna Robo. It resembles a lizard-like creature with an open mouth. Within lies Emperor Aton's throne room, as well as a lab used by General Kar for conducting experiments. It is capable of dispensing smaller air fighters called Gizmosquitoes. It also houses the Big Bang beam used by Jashinka to enlarge defeated Evolution Monsters.

Gizmosquitoes are small aerial fighter crafts used by the Jashinka Empire for air combat. They are typically held in the hangar of the Grand Gizmo and deployed through its mouth to go into battle. They are often used by the Jashinka to battle Dyna Robo, as well as attack and bomb targets. Their main weapon is a blue laser beam fired from their nose. 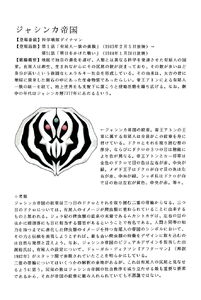